I really like group theory, and I’ve spent a lot of time reading about groups and their properties. Most of these properties seem like very natural things to consider ($p$-groups, abelian groups, simple groups, etc.) and the ones that don’t typically seem motivated by some external factor (solvable groups come to mind). However, I have always been somewhat confused by nilpotent groups. I know that they are “almost abelian”, and I can rattle off some facts about them and sketches of proofs… But it was never made clear to me how to work with them in practice. If I come across a nilpotent group in the wild, how does that help me? Surely I should be able to leverage the “almost abelian”-ness in a way that’s more general than “elements of coprime order commute”.

I figured out how the nilpotency assumption is helpful in computations last night, though I got on the topic in a rather roundabout way. I forget exactly how my brain moved between these ideas, but the basic outline was this:

I spent some time thinking about what these new axioms might be, as well as some categorical questions: Is the subcategory of class $c$ nilpotent groups reflective in $\mathsf{Grp}$? After all, $\mathsf{Ab}$ is. But then I started thinking about why somebody might care about this construction. We care about the abelianization because it simplifies the group. It stands to reason that a nilpotentization might simplify the group with a slightly softer touch. By varying $c$, we can control how big a quotient we want to take – this lets us trade simplicity of the quotient against fidelity to our original group! Immediately, there are two very natural questions that arise:

It was in the process of understanding the second bullet that I felt like I started understanding some practical benefits of nilpotency.

Let’s start with the second bullet and talk about what nilpotency buys us. We understand the class-$1$ groups (alias: abelian groups) well, so let’s take a look at class-$2$ groups.

This wholly obvious fact says that we can commute any two elements provided we pick up a factor of $[g,h]$. In this way, $[g,h]$ measures how $g$ and $h$ fail to commute.

Concretely, this means we can always push commutators to one side!

So in a group of class $2$, we can rearrange our product as much as we want as long as we promise to multiply by a fudge factor from $[G,G]$ at the end. For any permutation $\sigma$:

Similarly for groups of class $3$. Now $[G,G,G,G]$ is trivial2, so our commutators may not be central, but our “second order” commutators are:

In this instance, the “second order” fudge factor $[[g,h],k]$ (often written as $[g,h,k]$ – see the earlier footnote) will commute with everything.

It is clear that these get hairy fairly quickly, but it makes the entire concept feel (at least to me) more concrete. It also makes clear how this is a generalization of abelianness - when we commute things, the resulting fudge factors are easy to control. Of course, the degree of “easiness” decreases fairly quickly as the nilpotency class $c$ increases. For $c=2$, though, this seems like a viable object to study if one is looking to simplify a group!

So how might we find the nilpotentization of $G$? Earlier on in the post I alluded to some abstract nonsense which will give us the result (It probably says something about me that this was the proof my sleep-deprived brain first reached for). However, now that we’ve remembered the lower central series definition of a nilpotent group, there is a much cleaner, down-to-earth approach:

But this is fantastic! We know that subgroups of this form are called verbal and they satisfy lots of very nice properties 3! In particular, all verbal subgroups are characteristic, thus normal.

As one last question, we might ask how easy it is to compute with these nilpotentizations. Luckily, there are some efficient implementations of these results. You can read more about these algorithms here, but the tldr is:

Since GAP ships built-in with Sage, we have access to these algorithms in our favorite computational tool. Unfortunately, the $\mathtt{NQ}$ package wasn’t included in my sage installation by default – I had to install gap-packages via pacman in order to get it.

With that subtle point out of the way, let’s see it in action. Since the sage cloud server I use doesn’t play nice with the GAP console, I can only include a screenshot. You should definitely experiment with this stuff yourself, though! 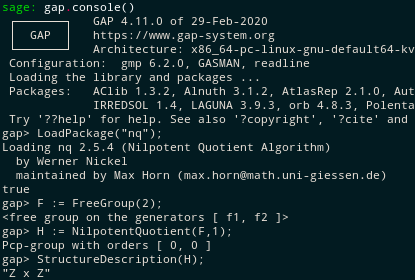 In the case of finite groups, we can write dumber code in pure sage:

I only wrote this code today, so I haven’t had time to play around with it yet. Here are some fun questions I have for myself, which you might also want to think about!

There’s lots of interesting questions one gets by playing around with these groups! Let me know in the comments if you think of any of your own ^_^