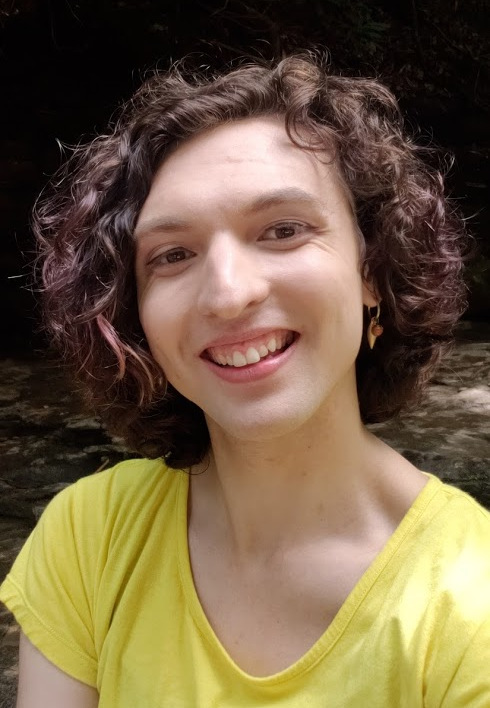 Hello! I’m Chris, a nonbinary math PhD student at UC Riverside. I got my undergraduate degree (in Discrete Math & Logic) from Carnegie Mellon, where I also studied music and computer science. My mathematical interests lie in the intersection of algebra, geometry, and logic – an intersection which is often made clearer with the language of category theory. Following in the great mathematical tradition, I will write my email as: cgros007 AT ucr DOT edu.

It’s not healthy to spend all of your time on math, and I keep myself busy with other passions as well. I’ve been playing flute for almost 20 years now, and have been composing for almost 10. I am a huge proponent of the Dalcroze School of music pedagogy, and I like to bring Dalcrozian ideas into my mathematics teaching. I also watch too much youtube.

I think examples are extremely important when learning anything, and computation is an invaluable resource when doing research. Unfortunately, I am often unable to find explicit examples of objects and theorems in higher mathematics. Moreover, there aren’t many resources for seeing how mathematicians “in the wild” use computers to help understand the problems they’re solving. I started a blog to try and combat both of these issues. Whenever I struggle to find (useful) concrete examples of a theorem I’m learning, I’ll make a post so that future students will have an easier time finding some. I’ll also post about my research, often with examples of sage code that I’ve used to play with the problem at hand.

This website was designed by the incredible Remy Davison. Many thanks for both his friendship and his artistic skill.

I have had some mathematicians tell me that I need to “get over” a “reliance” on concrete examples. Out of spite, or perhaps to clarify my views on the topic, here is a quote that I deeply identify with:

“If you are, like me, someone who prefers large vistas and powerful theories (I was influenced but not converted by Grothendieck), then it is essential to be able to test general results by applying them to simple examples…. These are examples where one can do concrete calculations, sometimes with elaborate formulas, that help to make the general theory understandable. They keep your feet on the ground…. [M]ost of all a good example is a thing of beauty. It shines and convinces. It gives insight and understanding. It provides the bedrock of belief.” – Sir Michael Atiyah.

Perhaps less spitefully, here are some other quotes that I find impactful: