I’m in a measure theory class right now, and I think it’s important to be properly comfortable with measure theory in a way that I’m currently not. It has deep connections with things that I find very interesting (Descriptive Set Theory, Ergodic Theory, their intersection in Amenable Groups, etc.) and it’s one of my go to examples of an “obviously useful” branch of math. If you can apply your interests to measure theory somehow, I think that’s a compelling argument to fend off questions of “why is this worthwhile” (at least from other mathematicians).

All this to say I’ve started reading more measure theory books, though it makes my pile of unread logic and algebra books sad. In particular I bought a copy of Halmos from an online used bookstore for $8 (!!), and it’s a fantastic read so far. I wanted to highlight one particular observation that, while obvious in hindsight, was extremely helpful for me. Hopefully by posting about it here, I’ll also find it more memorable. While this isn’t a “trick” in the same sense as the other posts in this series, I still feel like it fits here.

I think I didn’t see this because I was too focused in on generalizing my understanding of $\liminf$ and $\limsup$ of sequences $(x_n)$. In the case of real sequences, $\liminf$ is the smallest thing some subsequence converges to, while $\limsup$ is the biggest thing some subsequence converges to. I think the following image does a good job showing what I mean: 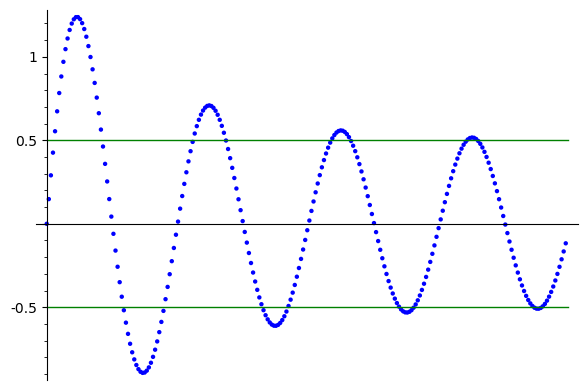 Not only does this make it much more obvious that these definitions are dual, it more readily generalizes to the definition for sets:

(As a quick check in – why are the two definitions of $\liminf x_n$ equivalent?)

As with all realizations, I should have seen this much sooner. It’s a common trick in descriptive set theory to pass between logical constructors and set theoretic operations. These are entirely natural, and correspond to a correspondence between the (syntactic) boolean algebra of propositions, and the (semantic) boolean algebra of sets. Yet again I’m talking about syntax and semantics on this blog, and yet again I’m promising a post detailing a few of my favorite examples. For now though, let’s write this one example out explicitly: Say we have a family of properties $P_n$. Then

This trick works more broadly too1. For any index set $I$, we have

Since we only know that countable setwise operations are allowed in measure theory, much of descriptive set theory amounts to showing that certain quantifiers only need to range over countable sets.

Of course, through this lens, the description in Halmos is obvious:

I think this lens sheds some light on $\liminf$ and $\limsup$ of real sequences too. I’ll leave it to you to work through the quantifiers, but it turns out that $\limsup x_n$ is the smallest number $x^*$ so that infinitely many $x_n$ are bigger than $x^*$. This is the central observation in the proof of the Cauchy-Hadamard Theorem, and it’s nice to see that this observation is actually obvious (in this interpretation of $\limsup$).