I was on mse last night (later than I should have been…) when I saw a really interesting question. In the interest of keeping the blog post self contained, I’ll transcribe the question here (with some notational edits):

If not, is there a necessary and sufficient condition for this to hold?

I think automorphism groups are really interesting. They’re a very natural operation on groups, and yet they seem to be quite difficult to understand in general. I haven’t done any extensive work with them, but the fact that they’re so difficult to compute surprises and excites me. Moreover, if a group $G$ measures the symmetries of an object $X$, then in some sense $\text{Aut}(G)$ measures the “symmetries among the symmetries”. This seems like an interesting topic of study, analogous to the study of Syzygies in ring theory1. I’ve actually asked a question about this myself, though I didn’t phrase the question as clearly as I could have so I didn’t get any answers. It’s also possible the problem is Hard™️, which would be another reason there’s no answers. In general, automorphism groups are one of many objects I’d like to learn more about, so I got excited to see this question about them.

My instinct, upon seeing this problem, was to answer “no”. That is, there’s no reason $\text{Aut}(A)$ should be a subgroup of $\text{Aut}(B)$. After all, it’s possible for $A$ to be some very symmetric object living inside some less symmetric object $B$. Then there’s no reason why a symmetry of $A$ should extend to a symmetry of the larger object $B$.

One picture you might have in mind is this2: 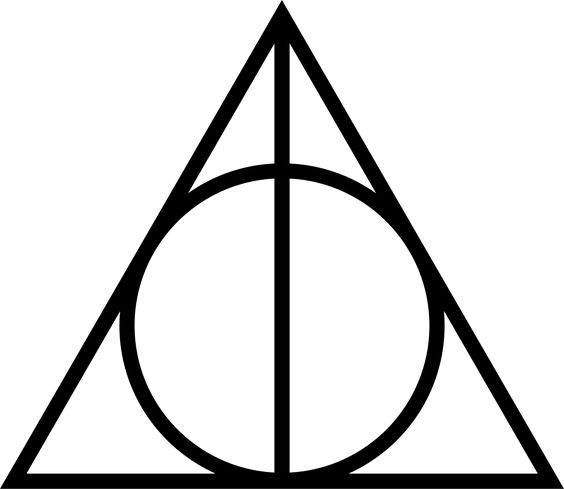 The circle has LOTS of symmetries, but the deathly hallows logo3 has only two. The “do nothing” symmetry, and the “reflect horizontally” symmetry. Most of the symmetries of the circle don’t extend to symmetries of the entire object, and there’s no reason to expect symmetries of groups to behave any differently. Mark Bennet phrases this well in his comment under the original question.

Gerry Myerson asked if I could give a counterexample, rather than informally arguing that such a theorem shouldn’t be true. It’s a good question, but he asked it around 2am, so when I couldn’t immediately think of one (again, I’m not very comfortable with computing automorphism groups myself) I told him I’d think harder (and ask sage) in the morning.

By the time I checked again, there were already some counterexamples floating around. Ancientmathematician mentions $\mathfrak{S}_6 \leq \mathfrak{S}_7$, and uses some “well known” facts about their orders (which happened to be not-so-well-known to me :P). Moreover, in a comment on my answer, Derek Holt mentions $C_2 \times C_2 \leq D_8$, where again the automorphisms can’t work out (though again this wasn’t immediately obvious to me).

I was still interested in verifying this by hand, and since sage doesn’t seem to have a way to compute automorphism groups directly4 I decided making calls to gap.eval() every other line was too much of a hassle (also it kept weirdly segfaulting?)… If I wanted to do this, I was going to have to do it directly in gap. It took me some experimenting to get the syntax right, but at the end of the day, it really wasn’t too hard to get some (naive) code working:

You can uncomment either of the tests at the bottom to verify that the counterexamples mentioned above are actually counterexamples. You can also ask this same question of any group you’re interested in. It raises some warnings along the way (something about my code being inefficient for large subgroups), but it’s good enough for right now.

You might try to add a loop to this code to run TestGroup on every group of order $\leq 100$.

Being able to test a conjecture on all the “small” groups is obviously a useful skill, so if you aren’t sure how you would go about doing this, give it a try! It’s not too hard, and you can even test your code out in the sage cell above.