So I had an analysis exam yesterday last week a while ago (this post took a bit of time to finish writing). It roughly covered the material in chapter 3 of Folland’s “Real Analysis: Modern Techniques and Their Applications”. I’m decently comfortable with the material, but a lot of it has always felt kind of unmotivated. For example, why is the Lebesgue Differentiation Theorem called that? It doesn’t look like a derivative… At least not at first glance.

A big part of my studying process is fitting together the various theorems into a coherent narrative. It doesn’t have to be linear (in fact, it typically isn’t!), but it should feel like the theorems share some purpose, and fit together neatly. I also struggle to care about theorems before I know what they do. This is part of why I care so much about examples – it’s nice to know what problems a given theorem solves.

After a fair amount of reading and thinking1, I think I’ve finally fit the puzzle pieces together in a way that works for me. Since I wrote it all down for myself as part of my studying, I figured I would post it here as well in case other people find it useful. Keep in mind this is probably obvious to anyone with an analytic mind, but it certainly wasn’t obvious to me!

To start, we need to remember how to relate functions and measures. Everything we say here will be in $\mathbb{R}$, and $m$ will be the ($1$-dimensional) Lebesgue Measure.

If $F$ is increasing and continuous from the right, then there is a (unique!) regular borel measure $\mu_F$ (called the Lebesgue-Stieltjes Measure associated to $F$) so that

Moreover, given any regular borel measure $\mu$ on $\mathbb{R}$, the function

is increasing and right continuous.

This is more or less the content of the Carathéodory Extension Theorem. It’s worth taking a second to think where we use the assumptions on $F$. The fact that $F$ is increasing means our measure is positive. Continuity from the right is a bit more subtle, though. Since $F_\mu$ is always right continuous, we need to assume our starting function is right continuous in order to guarantee $F_{\mu_F} = F$.

This is not a big deal, though. A monotone function is automatically continuous except at a countable set (see here for a proof) and at its countably many discontinuities, we can force right-continuity by defining

which agrees with $F$ wherever $F$ is continuous. If we put our probabilist hat on, we say that $F_\mu$ is the Cumulative Distribution Function of $\mu$. Here $F_\mu(x)$ represents the total (cumulative) mass we’ve seen so far.

It turns out that Lebesgue-Stieltjes measures are extremely concrete, and a lot of this post is going to talk about computing with them2. After all, it’s entirely unclear which (if any!) techniques from a calculus class carry over when we try to actually integrate against some $\mu_F$. Before we can talk about computation, though, we have to recall another (a priori unrelated) way to relate functions to measures:

Given a positive, locally $L^1$ function $f$, we can define the regular measure $m_f$ by

The locally $L^1$ conditions says that $\int_E f dm$ is finite whenever $E$ is bounded. It’s not hard to show that this is equivalent to the regularity of $m_f$, which we’ll need shortly.

Something is missing from the above theorem, though. We know sending $F \rightsquigarrow \mu_F$ is faithful, in the sense that $F = F_{\mu_F}$ and $\mu_{F_\mu} = \mu$. We’ve now introduced the measure $m_f$, but we didn’t say how to recover $f$ from $m_f$… Is it even possible? The answer is yes, as a corollary of a much more powerful result:

Every measure $\mu$ decomposes (uniquely!) as

for some measure $\lambda \perp m$ and some function $f$.

In the case of Lebesgue-Stieltjes measures, Lebesgue-Radon-Nikodym buys us something almost magical. For almost every $x$, we see:

Now we see why we might call this $f$ the Radon-Nikodym derivative. In the special case of Lebesgue-Stieltjes measures, it literally is the derivative. We saw earlier that $F = F_{m_f}$ acts like an antiderivative of $f$, and now we see $f = \frac{d \mu_F}{dm}$ works as a derivative of $F$ as well!

In fact, yet more analogies are true! Let’s take a look at the Lebesgue Differentiation Theorem

For almost every $x$, we have:

Why is this called the differentiation theorem? Let’s look at $F_{m_f}$, which you should remember is a kind of antiderivative for $f$.

So this is giving us part of the fundamental theorem of calculus4! This theorem (in the case of Lebesgue-Stieltjes measures) says exactly that (for almost every $x$)

Let’s take a moment to summarize the relationships we’ve seen. Then we’ll use these relationships to actually compute with Lebesgue-Stieltjes integrals.

Why should we care about these theorems? Well, Lebesgue-Stieltjes integrals arise fairly regularly in the wild, and these theorems let us actually compute them! It’s easy to integrate against $m_f$, since monotone convergence gives us $\int g dm_f = \int g f dm$.

Then this buys us the (very memorable) formula:

and now we’re integrating against lebesgue measure, and all our years of calculus experience is applicable!

Of course, I’ve left out an important detail: Whatever happened to that measure $\lambda$? The above formula is true exactly when $F$ is continuous everywhere. At points where it is discontinuous we need to change it slightly by using $\lambda$. These are called singular measures, and they can be pretty pathological. A good first intuition, though, is to think of them like dirac measures, and that’s the case that we’ll focus on in this post5. 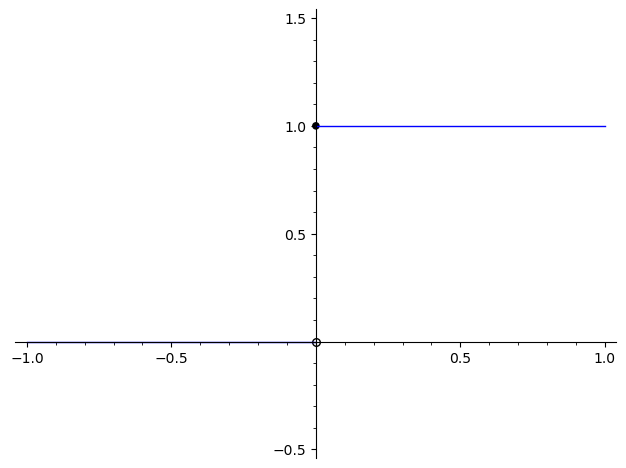 Recall our interpretation of this function: $H(x)$ is supposed to represent the mass of $(-\infty, x]$. So as we scan from left to right, we see the mass is constantly $0$ until we hit the point $0$. Then suddenly we jump up to mass $1$. But once we get there, our mass stays constant again.

Indeed, we see that

So $\mu_H$ is just the dirac measure at $0$ (or $\delta_0$ to its friends)! Notice this lets us say the “derivative” of $H$ is $\delta_0$, by analogy with the Lebesgue-Stieltjes case. Or conversely, that $H$ is the “antiderivative” of $\delta_0$. This shows us that recasting calculus in this language actually buys us something new, since there’s no way to make sense of $\delta_0$ as a traditional function.

It’s finally computation time! Since we know $\int g d\delta_0 = g(0)$, and (discrete) singular measures look like (possibly infinite) linear combinations of dirac measures, this lets us compute all increasing right-continuous Lebesgue-Stieltjes measures that are likely to arise in practice. Let’s see some examples! If you want to see more, you really should look into Carter and van Brunt’s “The Lebesgue-Stieltjes Integral: A Practical Introduction”. I mentioned it in a footnote earlier, but it really deserves a spotlight. It’s full of concrete examples, and is extremely readable! 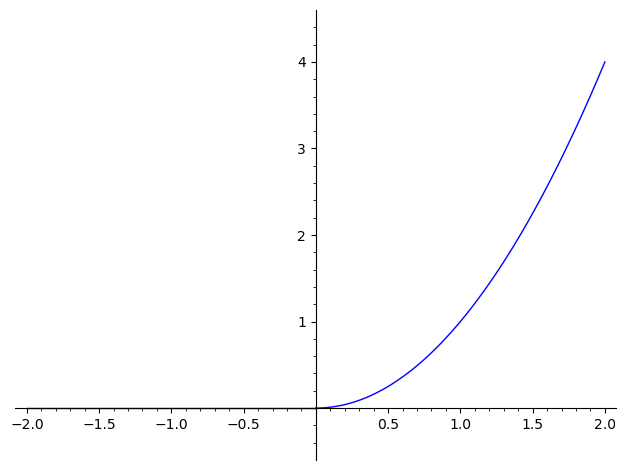 So $\mu_F$ should think that everything is massless until we hit $0$. From then on, we start gaining mass faster and faster as we move to the right. If you like, larger points are “more dense” than smaller ones, and thus contribute more mass in the same amount of space.

Say we want to compute

But both of these are integrals against lebesgue measure $m$! So these are just “classical” integrals, and we can use all our favorite tools. So the first integral is $0$, and the second integral is $2\pi$ (integrating by parts). This gives

That wasn’t so bad, right? 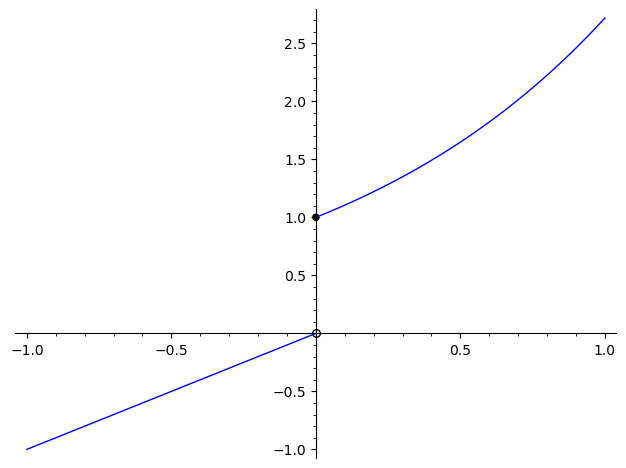 You should think through the intuition for what $\mu_F$ looks like. You can then test your intuition against a computation:

In the previous example, $\lambda$ was the $0$ measure since our function was differentiable everywhere. Now, though, we aren’t as lucky. Our function $F$ is not differentiable at $0$, so we will have to work with some nontrivial $\lambda$.

we can handle the $\delta_0$ part and the $f dm$ part separately!

We know how to handle dirac measures:

And we also know how to handle “classical” integrals:

Can you intuitively see how $\mu_F$ distributes mass?

As another exercise, can you intuit how $\mu_F$ distributes mass when $F(x) = \lfloor x \rfloor$ is the floor function?

Ok, I hear you saying. There’s a really tight connection between increasing (right-)continuous functions $F$ on $\mathbb{R}$ and positive integrable functions $f$. This connection is at its tightest wherever $F$ is actually continuous, as then the measures $\mu_F$ and $m_f$ have a derivative relationship, which is reflected in the same derivative relationship of functions $F’ = f$. Not only does this give us a way to generalize the notion of derivative to functions that might not normally have one (as in the case of the heaviside function and the dirac delta), it gives us a concrete way of evaluating Lebesgue-Stieltjes integrals.

But doesn’t this feel restrictive? There are lots of functions $F$ which aren’t (right-)continuous or increasing that we might be interested in differentiating. There are also lots of nonpositive functions $f$ which we might be interested in integrating. Since we got a kind of “fundamental theorem of calculus” from these measure theoretic techniques, if we can show how to apply these techniques to a broader class of functions, we might be able to get a more general fundamental theorem of calculus.

Of course, to talk about more general functions $F$, we’ll need to allow our measures to assign negative mass to certain sets. That’s ok, though, and we can even go so far as to allow complex valued measures! In fact, from what I can tell, this really is the raison d’être for signed and complex measures. I was always a bit confused why we might care about these objects, but it’s beginning to make more sense.

This post is getting pretty long, though, so we’ll talk about the signed case in a (much shorter, hopefully) part 2!