To nobody’s surprise, I was on MSE tonight, and saw a simple question about group theory. The original question doesn’t matter as much as a question it made me wonder to myself:

Intuitively it feels like the answer should be “yes”, but I wasn’t able to come up with a proof myself. Thankfully it didn’t take much googling to find an excellent example due to pjs36. I’ll show it for completeness, but you can find the original post here.

Since a picture is worth a thousand words, I’ll steal pjs36’s picture: 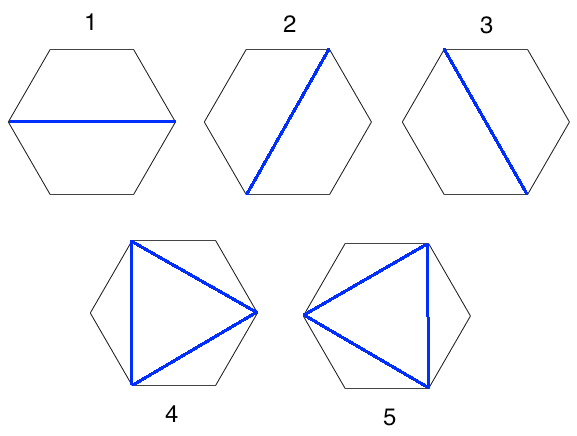 If you know where these $5$ subpolygons get sent, you actually know where the whole hexagon gets sent! This witnesses $D_{12} \leq \mathfrak{S}_5$ in a starkly beautiful way.

It got me wondering, though. Can we run a similar argument to get $D_{2m} \leq \mathfrak{S}_n$ for other choices of $m$? Since you’ve read the title of this blog post, you know the answer is “yes”1. But at this point I should issue a quick clarification: This (very clever!) idea is not actually my own – I found it in yet another mse post. I was already planning on writing up a blog post about this problem, but when I found the solution I knew I had to talk about it. Now, let’s talk through how we might have solved this problem ourselves:

Pjs36’s solution feels like it should generalize, and looking more carefully at the pictures above, we’re considering the $2$-gons and $3$-gons living inside of our $6$-gon… This idea links up well with our counterexamples from earlier, since the subpolygons of an $m$-gon are exactly the $\ell$-gons for $\ell \mid m$ and prime powers are special in the divisibility order.

We want to make $n$ (the number of generators of our symmetric group) as small as possible, so we should make the subpolygons we look at as big as possible (so that there aren’t many). Since we know from our earlier investigation that $p^k$-gons are the obstruction to “shrinking” $n$, whatever construction we do should give us $p^k$ objects to permute when we look at a $p^k$-gon.

Next, we can glue these together into a map

which I claim is actually injective.

Using this “put them next to each other” embedding, we see that

According to Upper Bounds on the Sum of Principal Divisors of an Integer by Eggleton and Galvin (up to change of variable name, to be consistent with the other variables in this post):

This tells us that we can embed $D_{2m}$ in a symmetric group with generators that shrink rapidly as the number of principal divisors of $m$ increases (provided each is not individually too small).