Thankfully, this should be a comparatively short post, since $L^p$ spaces are already pretty concrete, and (at least in my mind) don’t need a ton of motivation. We want to integrate things, and $L^p$ spaces (for $p \lt \infty$) collect the functions which we can integrate.

The lower values of $p$, such as $p=1$, put emphasis on the decay of a function near $\infty$. The benefit we gain is that they place relatively little emphasis on singularities.

Conversely, large values of $p$, such as $p=\infty$, put little emphasis on the decay of a function, but are more sensitive to (potentially mild) singularities. 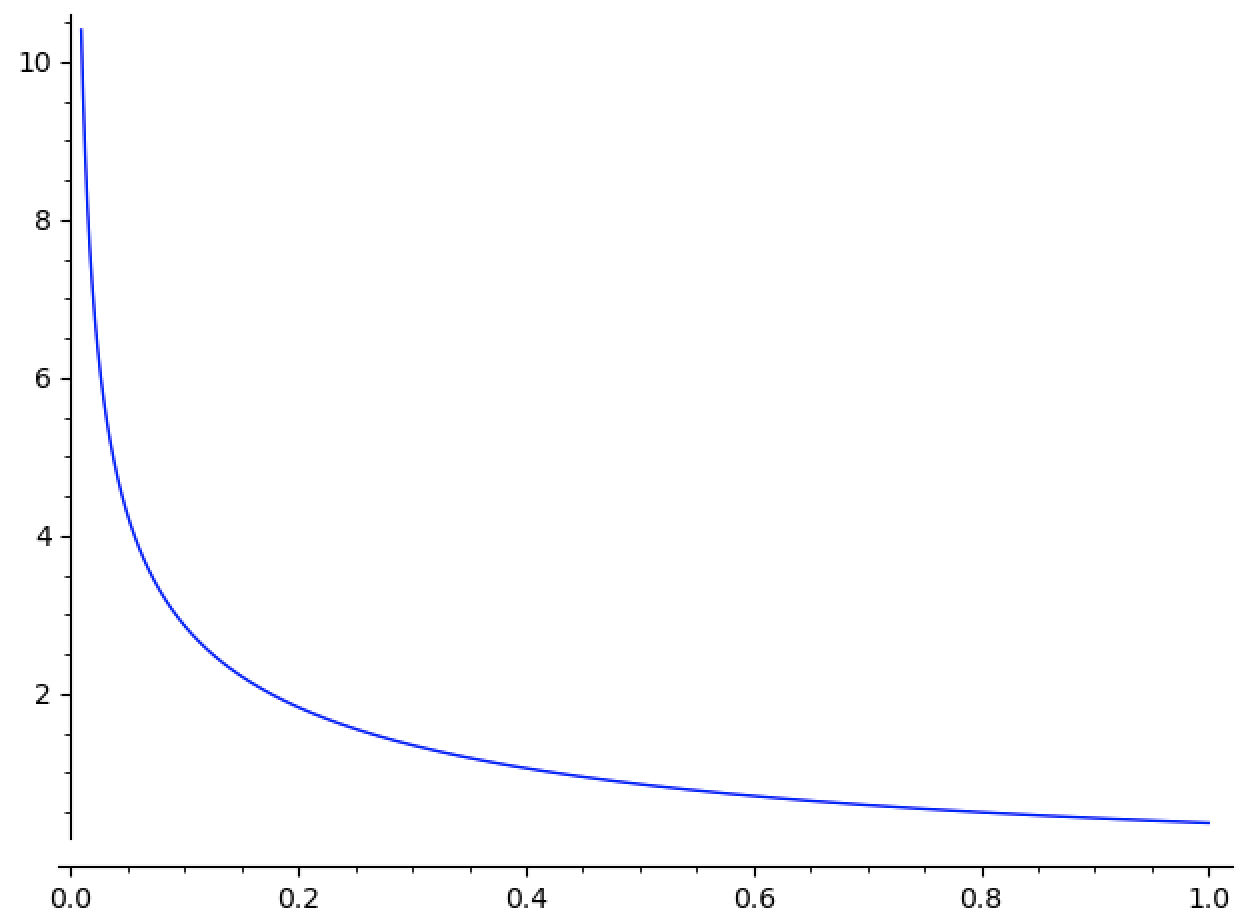 Conversely, consider the constant $1$ function, shown here for completeness more than anything else: 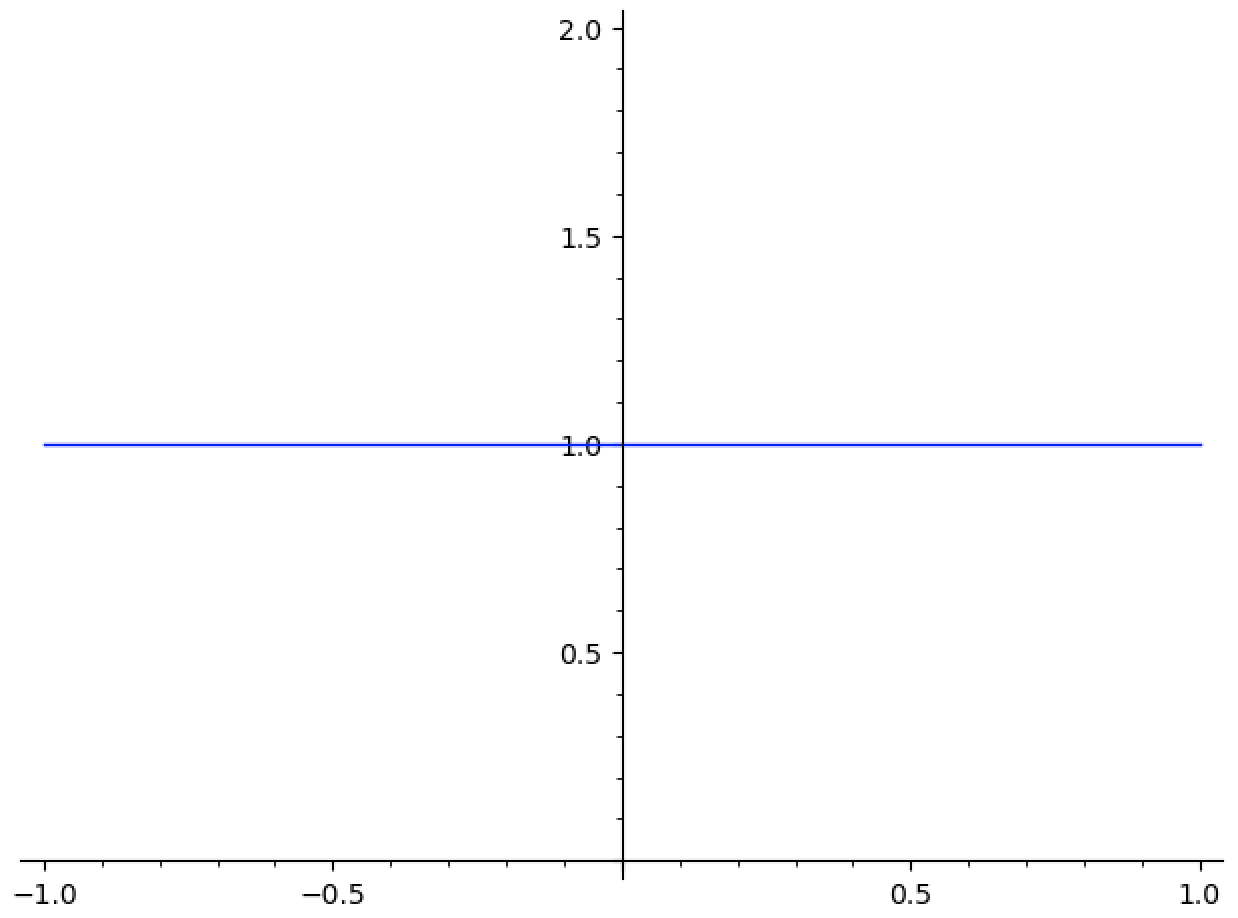 This function doesn’t decay at all, so is certainly not $L^1$. It turns out this function is only $L^\infty$, which doesn’t care at all about decay. It only cares about boundedness. 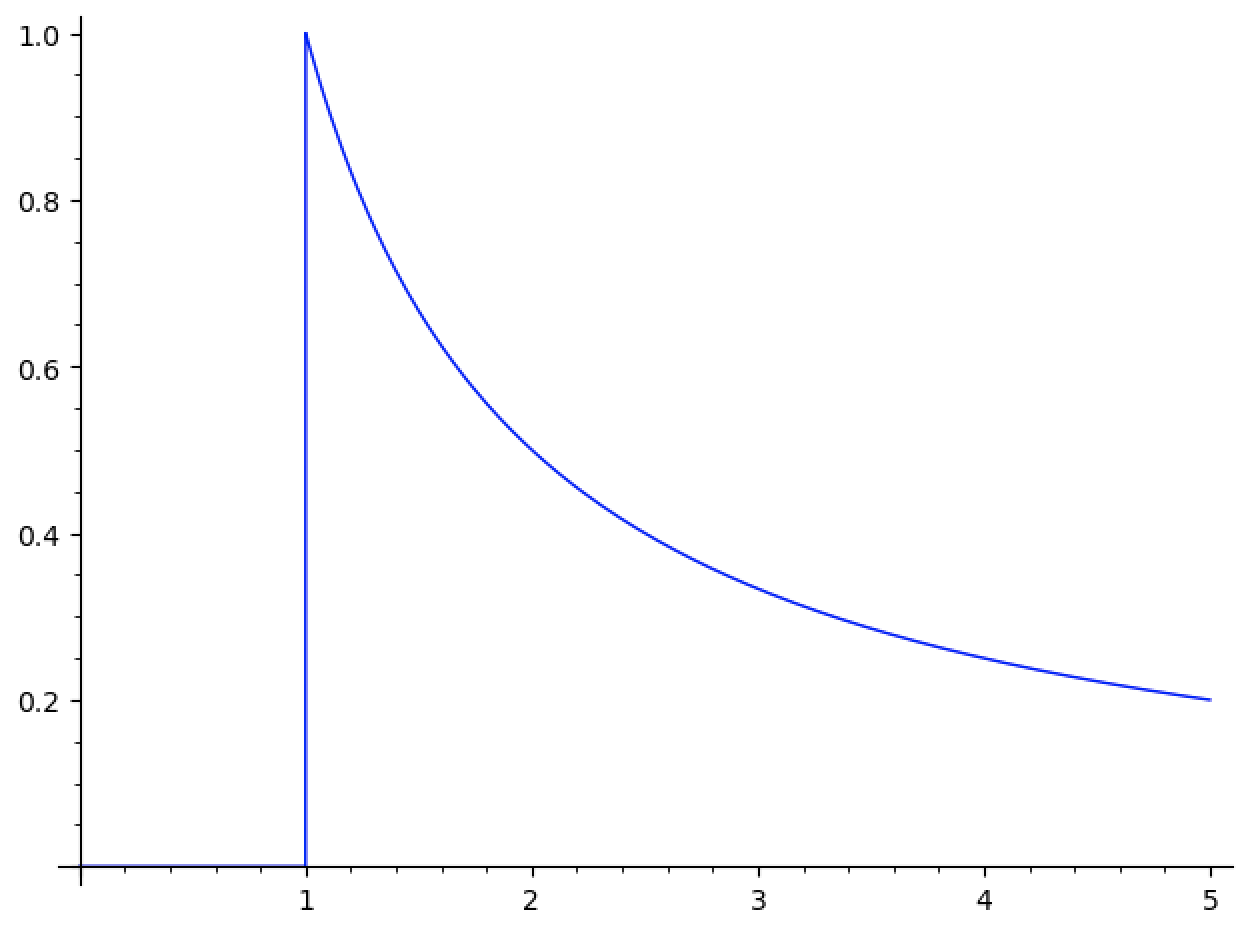 This function decays too slowly to be $L^1$, but it does decay quickly enough to be $L^2$.

The most important cases are $L^1$, $L^2$, and $L^\infty$, but there are reasons to care about other choices of $p$ as well. Psychologically, they let us interpolate between how much singularity we want to allow, versus how slowly we want to allow our functions to decay.

As is often the case, we need to treat $L^\infty$ specially. We write2

As usual, we will consider two functions the same if they agree almost everywhere. We will also often write $L^p(X)$, $L^p(\mu)$, or even $L^p$ if the measure or space is clear from context.

It turns out $L^p(\mu)$ comes equipped with a ton of structure! The norm $\lVert f \rVert_p$ really is a norm3, and this norm makes $L^p(\mu)$ into a banach space (so we can talk about convergence without worry4).

Let’s see some important examples of $L^p$ spaces before we move on:

These sets of functions are dense in $L^p(\mathbb{R}^n)$ and $L^p([0,1])$, where $p \neq \infty$. More generally, they are true in $L^p(X,\mu)$ for radon measures on locally compact hausdorff spaces. See Rudin’s Real and Complex Analysis for more details.

These families of dense functions require a notion of differentiation. They’re definitely true in $\mathbb{R}^n$ and $[0,1]$, and I suspect they’re true over any manifold. I don’t have a reference on hand, though.

These families of functions also require some compactness condition (because we’re using the stone-weierstrass theorem).

There’s actually a kind of master theorem for density results in $L^p$ spaces ($p \neq \infty$), which takes some basic properties of a class of functions and tells you it’s dense. There are also generalizations of the theorems above to much more broad classes of measure spaces. For each of these results, see this pdf from Bruce Driver’s UCSD lecture notes.

Before we move on, these density results are one potential source of motivation for $L^1$. We’re obviously interested in continuous functions, and if we want to integrate things, the $L^1$ norm seems like a fairly reasonable metric to look at. The issue is that $L^1$ limits of continuous functions don’t need to be continuous! That is, $CX$ is not complete with respect to the $L^1$ norm. We like to know we can take limits with reckless abandon7, so we should take its completion. When we do this, we get exactly the $L^1$ functions.

This is one reason that $L^\infty$ behaves “pathologically” compared to the other $L^p$ spaces. When you take the completion of continuous functions with compact support in the $p$-norm for $p \lt \infty$, get get exactly $L^p$. However, when you take the completion in the $\infty$-norm, you get the functions vanishing at $\infty$. You might try to solve this by looking at the bounded continuous functions, rather than those of compact support8, but these already form a banach space! It seems that, unavoidably, $L^\infty$ has a bunch of extra stuff in it, and it’s this extra stuff that is responsible for many of the differences between $L^\infty$ and the other $L^p$ spaces.

Perhaps the most important inequality associated with $L^p$ spaces is Hölder’s inequality, which generalizes the Cauchy-Schwarz inequality.

This condition on $p$ and $q$ shows up frequently, and we call $q$ the conjugate of $p$ for convenience.

From this, one might ask if we actually have equality above. If you’re feeling particularly optimistic, you might even wonder if we can characterize which functionals in $(L^p)^*$ arise as $\phi_g$ for some $g \in L^q$.

Now for the magic part:

so $L^p$ is reflexive. It’s still not entirely obvious to me why reflexive spaces are as interesting as they are. It’s obviously a natural question (and a fairly algebraic one11), and it gives you quite a bit of bonus information (see here, for instance). I suspect that I’ll come to appreciate it more as I do more functional analysis12. At the very least, it’s nice to have a full characterization of the dual space, and it’s satisfying to get back where you started when you dualize twice.

With that said, here are the main theorems for useful inclusions:

If $X$ has finite measure, then going down is allowed. That is, if $q \geq p$, then every $L^q$ function is automatically $L^p$.

(As an easy exercise, you should prove this)

If $X$ is “discrete” in the sense that it does not have sets of arbitrarily small measure, then going up is allowed. That is, if $p \leq q$, then every $L^p$ function is automatically $L^q$.

(Again, this is a fairly easy exercise)

It turns out that $L^2([0,1])$ is meagre in $L^1([0,1])$. This is a topological notion of “smallness” which is roughly akin to being a nullset16. This is a cute application of the baire category theorem, which is the topic of an upcoming blog post.

We also have interpolation functions which, if $p \lt q \lt r$, lets us relate $L^q$ functions to those on either side.

That is, every $L^q$ function can be written as a sum of an $L^p$ function and an $L^r$ function.

That is, the $L^p$ classes are “connected”. If you’re $L^p$ and you’re $L^r$, then you’re automatically everywhere in between as well.

In fact, we have the bound

Alright, that was another huge information dump! This post felt less like a motivated tour through $L^p$ functions and more like a copy of a study guide, haha. I think that’s reasonable, though, since in my experience $L^p$ functions are pretty motivated by themselves. I’m mainly writing this so that when I talk about Banach spaces soon we’ll have all these examples to draw from. Plus, selfishly, it was nice to organize all this information while planning out this post.

I’ve learned from my mistakes, and I’m not going to try and give a concrete date for the next post. All I’ll say is: See you soon ^_^