Some Questions about the Mathematics of Hitomezashi

A little while ago I made a post with some sage code that makes pretty pictures based on a certain Japanese stitching based off of Hitomezashi Sashiko. It’s fun to play with, and I love making pretty pictures, but it also raises some interesting combinatorial questions! Questions which, unfortunately, I’m not sure how to answer. This post is about some partial progress that I’ve made, and also shows how I’ve been using sage to develop conjectures for these problems. I’ll end with the statement of a few of these conjectures, and if I’m lucky some readers will have ideas for attacking these problems!

First things first, let’s give a slightly more precise definition of the objects of interest. To each pair of binary strings $s_1$ and $s_2$, say of lengths $n_1$ and $n_2$, we’re going to associate a Hitomezashi Graph as follows:

Intuitively, we alternate putting a wall between adjacent cells of a grid. A $0$ or a $1$ in position $k$ tells us whether we start with or without a wall.

As a small example, let’s consider the strings 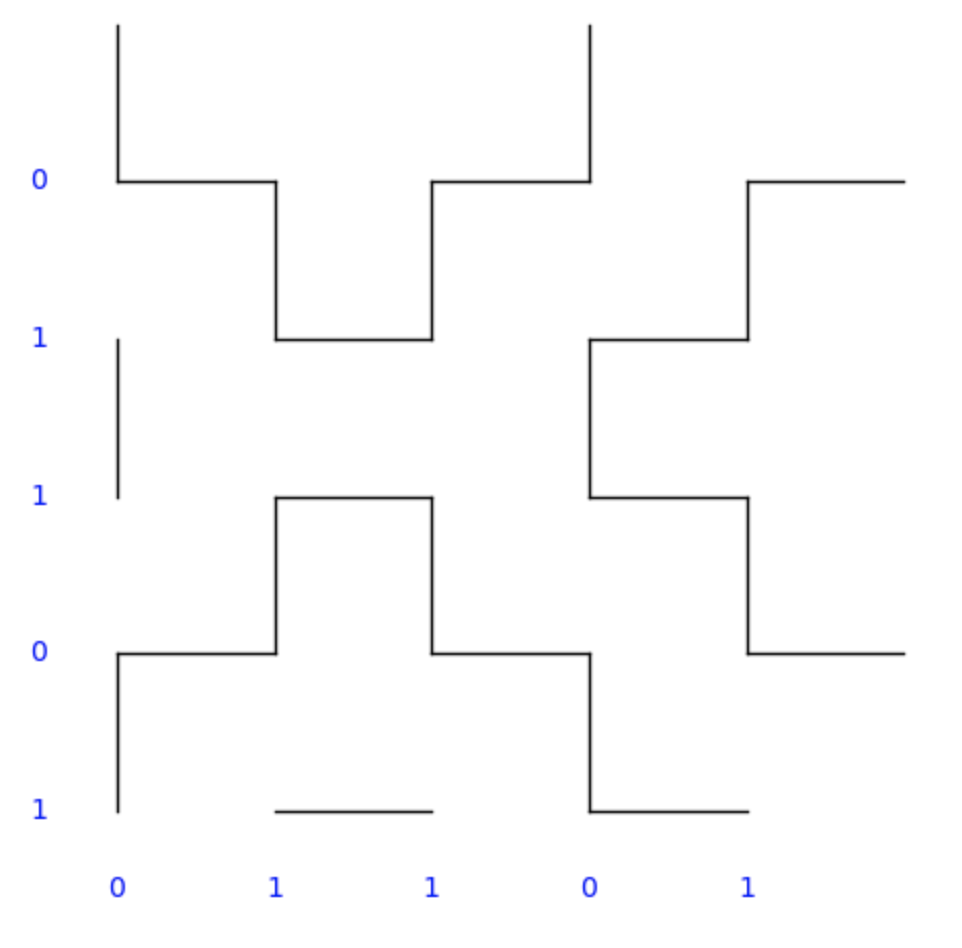 and the graph looks like this (overlayed on it): 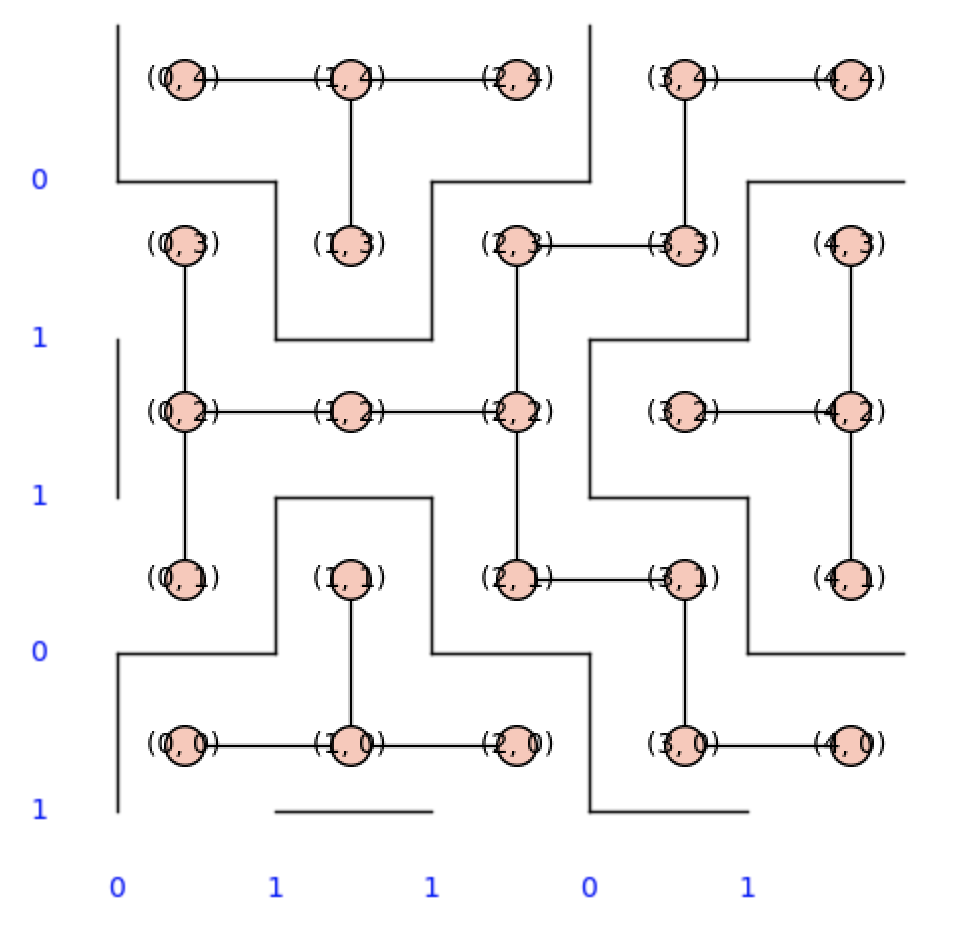 Now there’s a lot of of questions we can ask about these pictures. Let’s build a larger one to make things a bit more obvious: 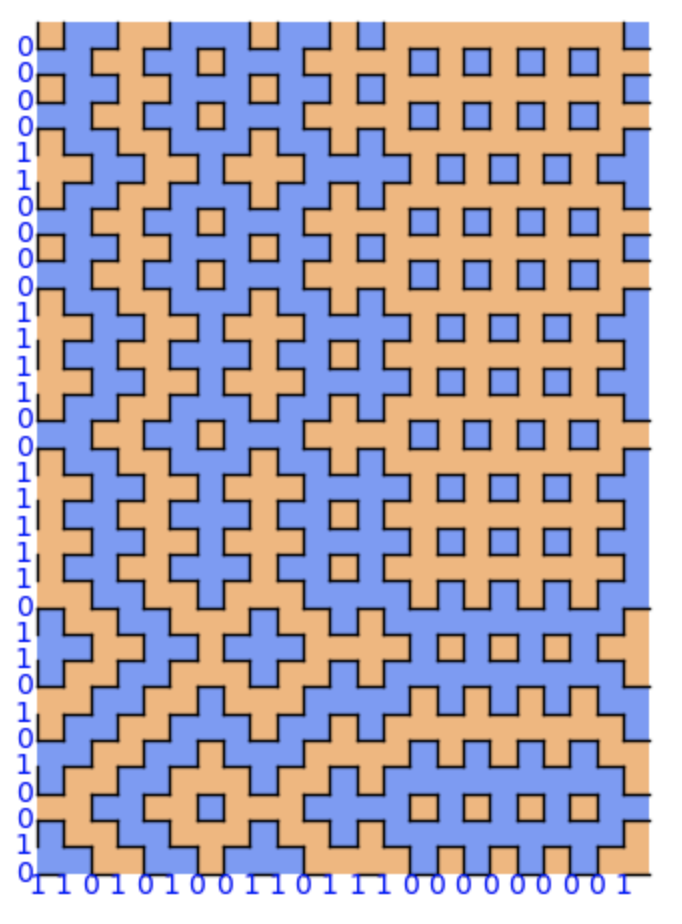 and already there’s some obvious questions to ask.

You should play around with making your own hitomezashi pictures, and try to come up with your own questions about them!

Let’s start with the expected number of $1 \times 1$ tiles. This is actually a super cute problem, and could easily have been 251 homework at CMU. If you want to work it out for yourself, now’s the time! Otherwise, let’s see how to do it together:

Of course, we can also code this up and check! Here is some code that

Here you can see the data plotted against $x^2 / 16$. I think it basically speaks for itself: 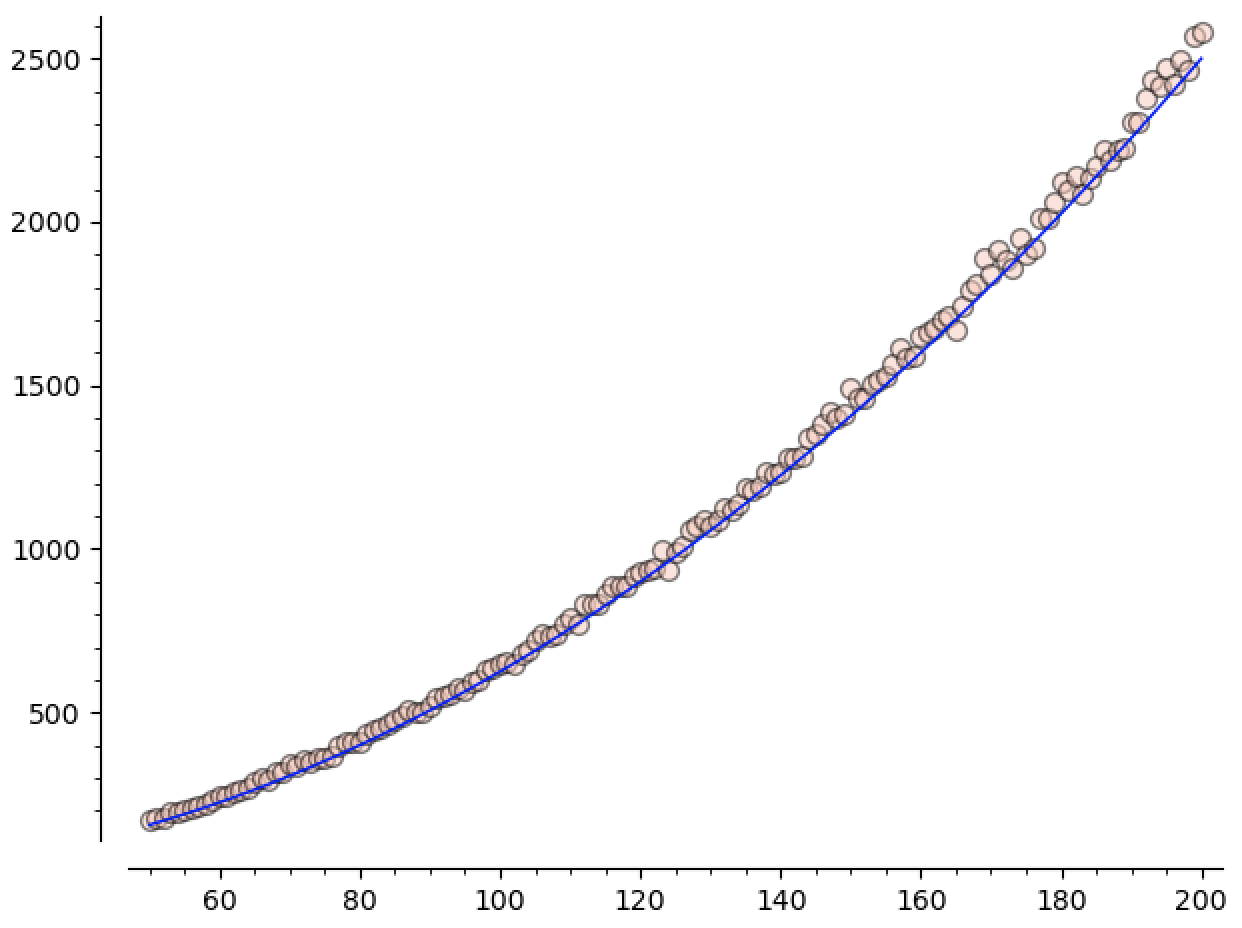 Of course, we can do a similar analysis to see that there are going to be $\Theta(n^2)$ many copies of any fixed pattern, in expectation. Moreover, if we have a pattern in mind, we can compute the leading coefficient implicit in this big-theta.

As a (fun?) exercise, how many plus-shapes do we expect to get in a random $n \times n$ Hitomezashi graph?

Keep in mind that the existence of certain walls will no longer be independent.

Now let’s move on to the number of regions, and the largest region size.

We just computed that there’s $\Theta(n^2)$ many singleton tiles, and obviously there can’t be more than $n^2$ regions in total! So we actually know the asymptotic behavior of the number of regions too. This is slightly unsatisfying, though. It would be nice to know what the leading coefficient is. It’s clear that lots of our regions come from $1 \times 1$ tiles, so we would expect the number of regions to be not much bigger than $n^2 / 16$… But precisely how much bigger do we expect it to be?

Again, we can write some code to test this out:

Here you can see the number of regions plotted against $x^2 / 16$. It’s appreciably bigger, and (unsurprisingly) the distance between them seems to be increasing as $n$ increases: 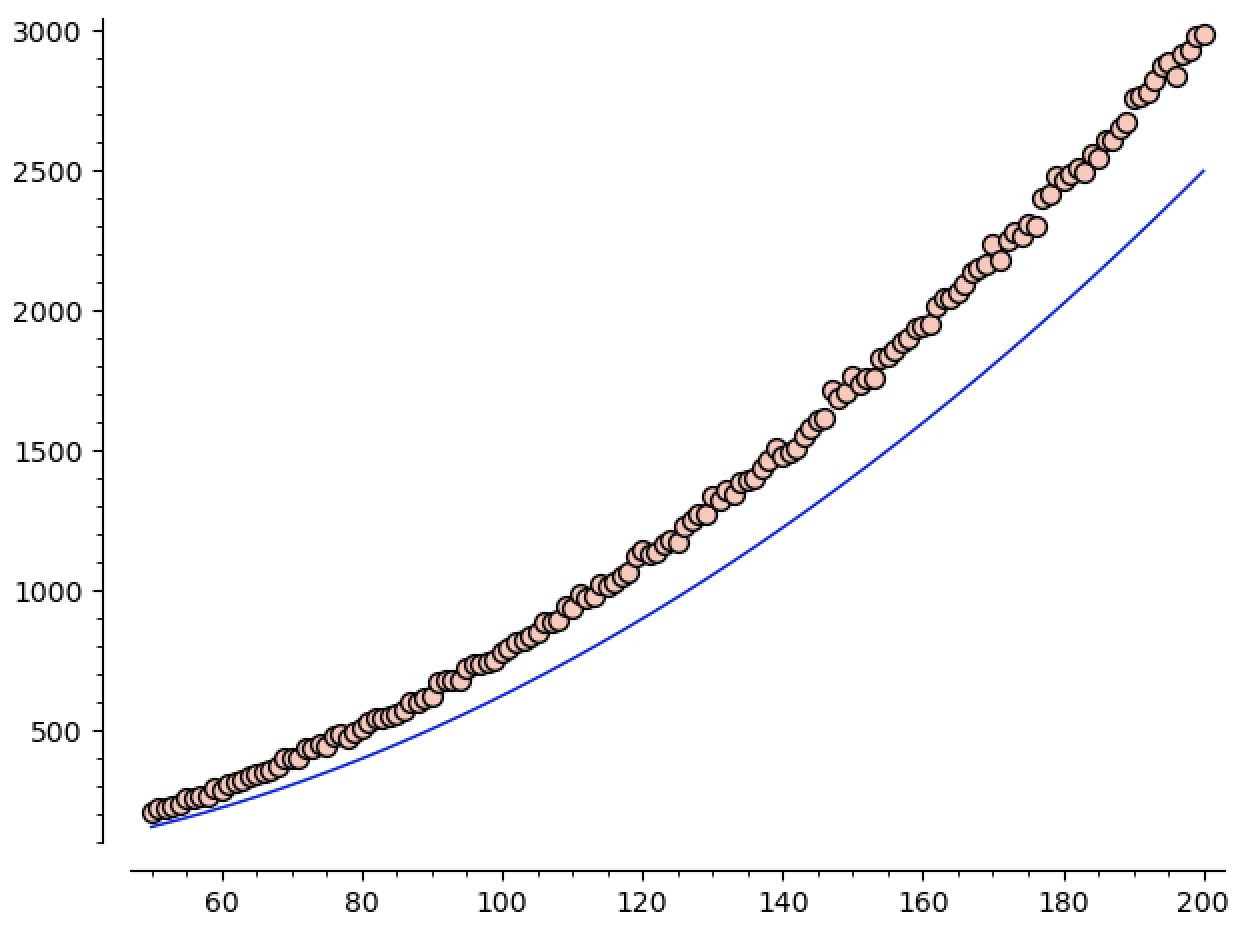 We know that we expect the number of regions to grow like $\Theta(n^2)$, so we can ask sage1 to guess the constant for us!

When we run this, we get

looks pretty good when we plot it against our data: 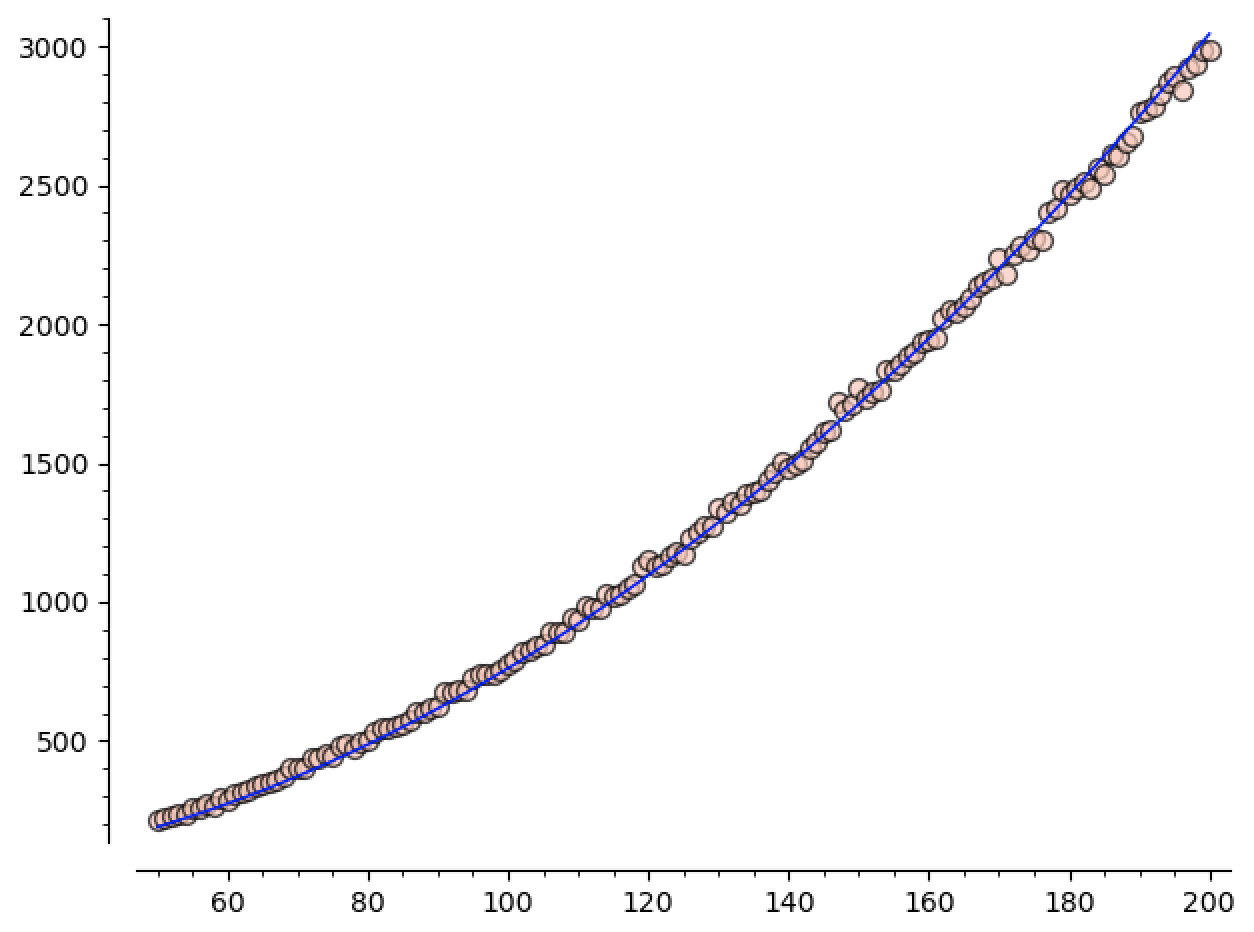 We can check how good this model is, both inside and outside the range of data we used to define it, by running a few more tests.

That’s pretty good! But how well does $\mathtt{guess}$ predict the number of regions for $n$ outside the range of data we initially used?

I’m definitely calling these a “win” for the formula!

They’re drifting apart, and I’m sure that’s because the model isn’t completely right. The standard deviation for how many regions we get is also growing as a function of $n$, so we might also need more than $50$ samples in this range to get closer to the true average? I’m not a statistician, haha2.

Again, I’m not a probabilistic combinatorialist, so these sorts of questions are a bit outside my wheelhouse. I can’t tell if they’re either quite simple or almost impossible, but I know I (unfortunately) have other things to work on3 and can’t spend any more time on this. Hopefully one of you will be able to tackle these! ^_^

Let’s say we know that there are $\approx C n^2$ many regions. Then since we have $n^2$ cells to allocate among the regions, the average region should contain $1/C$ many cells. So there must be a region which contains $\geq 1/C$ cells.

Assuming the easy conjecture from the previous section ($C \lt 0.1$), we see that there must be a region containing more than $10$ cells.

This is better than nothing, but the size of the largest reason seems to be growing with $n$ (see the graphs later on in this section), so having a constant lower bound is less than ideal.

We can do a bit better, though. We know that most of these regions are singletons! So the other regions are going to have to be bigger to compensate.

As a (fun?) exercise, can you lower bound the size of the largest region using this idea?

I’ll leave my attempt in a foothote4

Since I don’t have any more ideas for trying to solve this problem, let’s at least get some data and make a conjecture!

If we plot this data, we can see how the size of the largest region is growing with $n$: 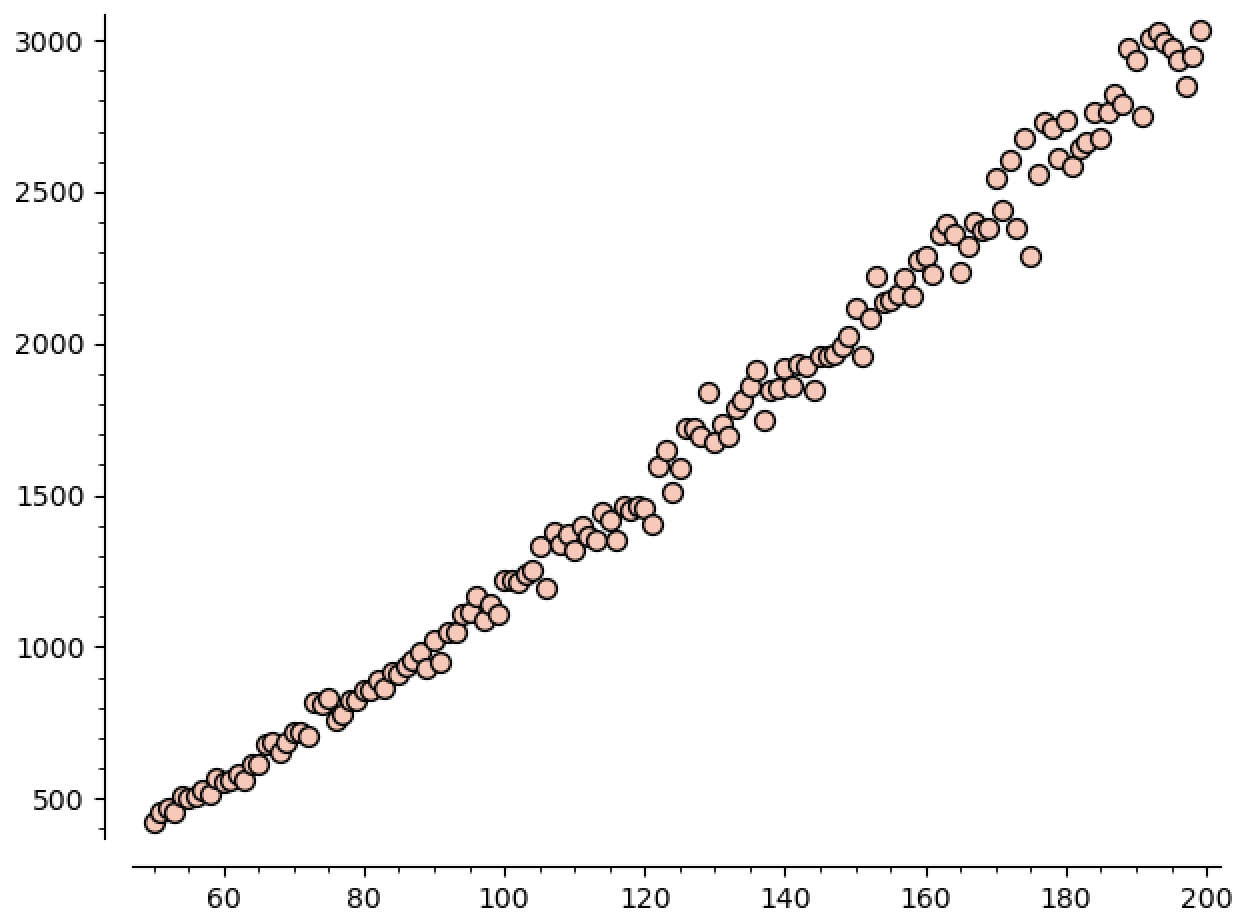 This plot really embarrasses the lower bound of $10$ that we got :P. You can read off the graph that it’s growing faster than linear, but how fast is it growing? Well, we can ask sage for a good polynomial model:

Now we see the guess is

Plotting this against our data gives 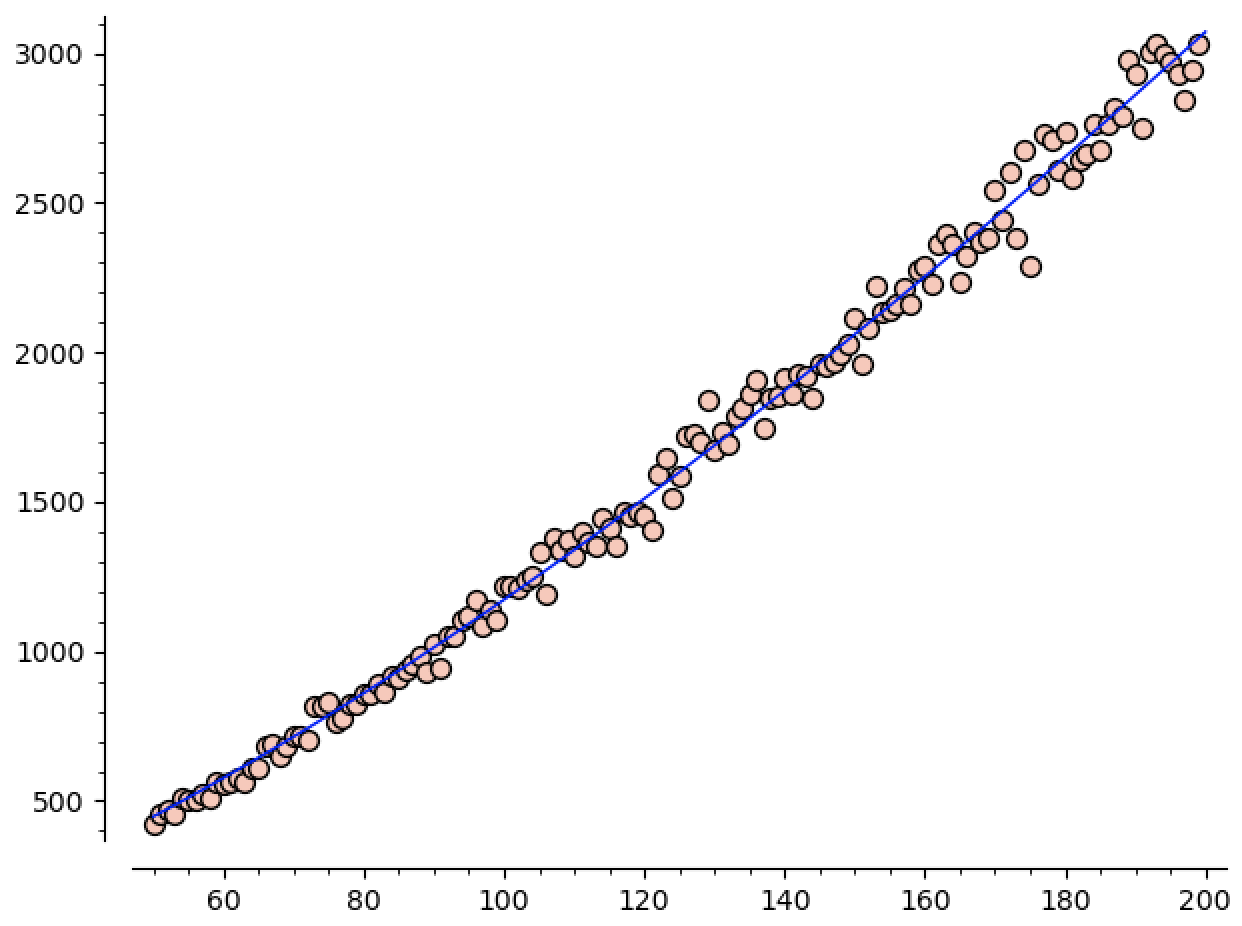 You can tell the standard deviation is higher here. Especially as $n$ increases. That said, we can still check the predictive value of our model.

This data then leads to a new series of conjectures

I think this kind of use case for sage is really powerful! It’s a great tool not only for solving concrete problems that arise in research, but also for formulating new conjectures and playing around with lots of concrete examples at once! Hopefully this showcases another angle on how we can use sage in the wild to work on our research problems.

Also, again, if anyone makes any progress on these, please let me know! I would love to know anything you’re able to figure out ^_^