Last Friday I gave a talk in GSS where I tried to give a super concrete application of topos theory to “mainstream” mathematics. The idea was to solve a simple analysis problem, streamlining the argument by using the internal logic of a sheaf topos. The good news is that I think I was quite successful in making my point that “ordinary mathematicians” should care about topos theory and constructive logic. The bad news is that the last 10 minutes of my talk were false… It didn’t end up mattering, but I was still pretty torn up about it. Anyways, in this post I’ll give an overview of the talk, which should double as a nice description of how to actuallly use topos theory to solve problems. I’m planning to start a new series soon where I go over this proof in more detail, explaining the relevant aspects of topos theory along the way!

So then, what was the talk about?

Recall the Weierstrass Approximation Theorem, which says that

If we fix an $\epsilon > 0$, then we know that each $f_\omega$ can be approximated by some polynomial $p_\omega$. It’s natural to ask if the $p_\omega$ also vary continuously in $\omega$. That is, are the coefficients continuous functions of $\omega$?

In case $f$ is “not nice”, the situation is much murkier. For instance, say1

each of these are continuous, nowhere differentiable, and highly oscillatory. With this in mind, a reasonable person might wonder if these $f_\omega$ are too sensitive to initial conditions for us to have continuity of the polynomial approximators2.

So, what to do? Notice that naively applying the theorem to each $f_\omega$ in no way guarantees continuity. We need a cleverer argument in order to treat the $f_\omega$ uniformly (at least locally) in $\omega$.

This brings us to the, probably quite surprising, idea motivating the talk:

I spent the next little while “defining” a topos as a category which “looks like $\mathsf{Set}$”. Since we know that we can encode all of mathematics in set theory (formally, $\mathsf{ZFC}$) then we should be able to translate that encoding to a topos too. I then drew an evocative picture on the board, which I completely ripped off from Ingo Blechschmidt’s website. In this post I’ll spare you my art, and just rip off the photo directly: 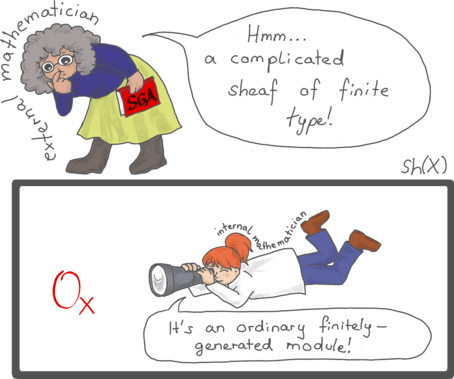 (Except when I drew this on the board, I used “weierstrass approximating polynomial” instead of “finitely generated module”)

Later in the talk I went into more detail about what exactly the “complicated external statement” is. But before we could go into that, we need to get an important caveat out of the way:

If we want to do mathematics inside of a topos, it has to be Constructive

What do I mean by “constructive”? Well to start, it shouldn’t use the axiom of choice. Indeed, even very weak principles like countable choice can fail3. It really doesn’t take too long (imo) to get used to working without choice4. But more importantly, we have to work without the Law of Excluded Middle (LEM), and this can take quite a bit of getting used to.

At this point in the talk I introduced the notion of a sheaf on a topological space, as well as sheaf maps, and thus the category $\mathsf{Sh}(X)$ of sheaves on $X$5. Of course, the canonical example of a sheaf on $X$ is the sheaf of continuous real valued functions on $X$, and I went over this example in some detail.

Then I said that the truth values $\mathsf{Sh}(X)$ are exactly the opens of $X$. I used this to explain how LEM fails6 in this topos. As you might expect, this is relevant because it means that we’ll need to know our proof of the weierstrass approximation theorem is constructive if we want to interpret it inside $\mathsf{Sh}(X)$.

At this point I talked about the natural numbers object in $\mathsf{Sh}(X)$ (which assigns to each open set $U$ the set $\mathbb{N}$, with the identity as the restriction maps. Then I showed how we can use this to build $\mathbb{Z}$ and $\mathbb{Q}$ inside $\mathsf{Sh}(X)$ just like we do in $\mathsf{Set}$. This was a multipurpose discussion, because it showed how we can do mathematics in a topos just as we do with sets. It also let me introduce the real numbers object $\mathbb{R}$ as the object you get by doing dedekind cuts inside $\mathsf{Sh}(X)$7, which I then externalized (without proof) as the sheaf of continuous functions on $X$ from before8!

Next I introduced the notation for forcing, where we say that $U \Vdash \varphi$ (read as “$U$ forces $\varphi$”) if $\varphi$ is true on $U$. I told the audience I would formally define this later, but the important “theorem” is called Soundness:

If we can prove $\varphi$ without LEM or choice, then it is true inside the topos $\mathsf{Sh}(X)$ in the sense that $X \Vdash \varphi$.

Here “theorem” is in scare quotes because I haven’t given anywhere near enough details to make this precise. But the purpose of the talk was to get the point across that we should care about constructive mathematics, and this idea of a theorem was good enough for that purpose.

Now that we have the soundness “theorem” in hand, let’s see if the weierstrass approximation theorem is even provable constructively! The next step of the talk was formally writing down the theorem we’re proving:

Now, it looks like there is a completely constructive proof of this theorem (see chapter $4$ of Bridges’ Constructive Functional Analysis9), but I wanted to show how easy it is to miss a usage of LEM, so I gave the proof via bernstein polynomials, which you can find in the “elementary proof” section of the wikipedia page.

In this proof we separate a sum into “good” and “bad” parts, which we approximate separately. But knowing that each summand is either “good” or “bad” requires LEM10.

Normally I would use this as a learning experience, and show you all what my mistake was. But I was so muddled up I don’t think it would be worth it11.

Next up was forcing semantics. If we want to know how to externalize theorems proved by mathematicians inside the topos, we need to know how to interpret logic inside as statements we can see from outside. In the talk I spent some time going over these, but they’re available in lots of places already (for instance, on page $316$ of Mac Lane and Moerdijk’s Sheaves in Geometry and Logic), so I won’t go into it in this post. I will show how to translate the weierstrass approximation theorem step by step, though:

we unravel the outer universal quantifier, and find12:

Unraveling this, we see:

There is an open cover $V_\alpha$ of $U_1$, and polynomials $p_\alpha$ with coefficients continuous on $V_\alpha$ so that, for each $V_\alpha$ we have

There is an open cover $V_\alpha$ of $X$ and polynomials $p_\alpha$ with coefficients continuous on $V_\alpha$ so that, on each $V_\alpha$ we have

which is exactly what we wanted!

Now, this is true because we have Bridges’ genuinely constructive proof of the weierstrass approximation theorem. The proof that I gave in the talk, involving LEM doesn’t quite provide this. Instead, it shows that there’s a dense open set $U$ of $X$, and an open cover $V_\alpha$ of $U$, so that the rest holds.

I’m still thinking about the double negation modality, and a while ago I asked a question about this on mse.

I’m planning to start a series on topos theory and how we can actually solve problems with it, and this double negation stuff will definitely get its own post.

In the meantime, I’ll leave you with the abstract for the talk. Take care everyone, see you soon ^_^.

Solving An Easy Analysis Problem: Together.

*asmr voice* Let’s all take a break. Unwind. And solve a nice friendly problem in elementary analysis. Now that I’ve lulled you into a false sense of security, you should know that we’ll be solving this (very concrete!) problem by using heavy duty machinery from category theory and logic. In particular, we’ll be using the language of topos theory. In the process, we’ll see why people care about constructive mathematics, how category theory can solve real problems, and whether topos theory really is as scary as its reputation makes it out to be. We assume no background in topos theory, or indeed anything but basic category theory.