Why is the Completion of a Local Ring "More Local" than just Localizing?

An oft-repeated piece of intuition I’ve seen while trying to learn algebraic geometry is that localizing a ring at a prime is like “zooming in” on that point. But if you want to zoom in “really close” then you have to take the completion of this ring… Why is that?

This is definitely an observation well known to experts (and even many nonexperts, probably), but I know I would have liked to have seen it spelled out explicitly, so here we are. I also would have realized it sooner if I’d read Hartshorne sooner, since he gives this exact observation in chapter $I.5$, in the section on completion1.

The idea, in hindsight, is obvious:

Open subsets in the Zariski topology are dense!

Well, one obvious idea is to look at functions defined on smaller and smaller open sets containing $\mathfrak{p}$. This is formalized by the idea of germs, and a fairly easy computation shows that the ring of germs at $\mathfrak{p}$ is exactly the localization $R_\mathfrak{p}$. Indeed, that’s where the name comes from. This also makes some intuitive sense, since (for integral domains)

This sounds like a great definition of “local”, so what’s the problem? Well, remember the boxed statement! Zariski open sets are dense, and thus remember information from “most of” $X$!

Here is one striking example:

Let $X$ and $Y$ be varieties over an (algebraically closed) field $k$.

This doesn’t sound too bad until you remember that $U$ is dense in $X$ and $V$ is dense in $Y$. So already $X$ and $Y$ have to be birationally equivalent!

So even though we only knew that $\mathfrak{p}$ and $\mathfrak{q}$ had isomorphic neighborhoods, we were able to lift this to a (coarse) equivalence of the whole of $X$ and $Y$!

Now, most of my geometric intuition comes from manifolds, and in that setting this would be extremely strange! After all, manifolds are locally euclidean, so if $X$ and $Y$ have the same dimension, then every point of $X$ and every point have $Y$ have isomorphic neighborhoods!

See, for instance, this picture I stole from the nlab2: 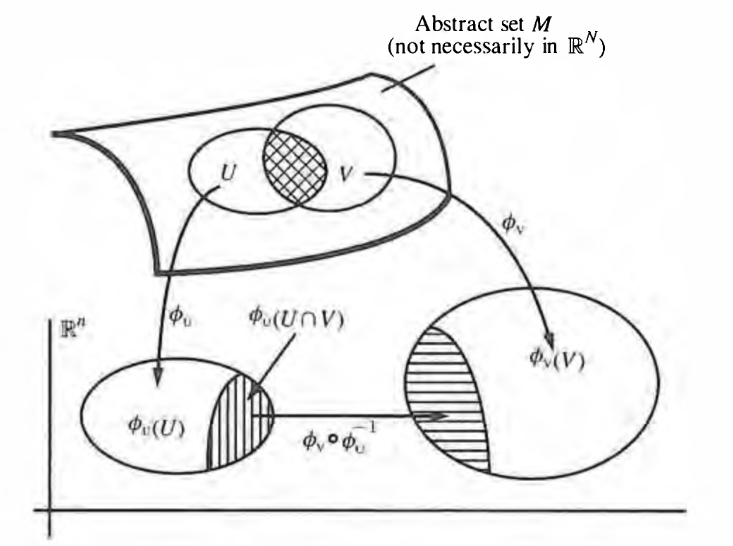 Intuitively, then we want to say that locally, every point of every variety “looks the same” as every other point, as long as the two varieties have the same dimension. We can’t get this behavior with just open sets in the case of varieties because there simply aren’t enough open sets to “get close enough” to a point.

But now let’s look at the completion.

The Cohen Structure Theorem says that any two complete regular local rings containing the same field $k$ of the same dimension are isomorphic. In fact, every such ring is isomorphic to $k[\![ x_1, \ldots, x_n ] \!]$.

This is the analogue in algebraic geometry of the fact that any two points of manifolds of the same dimension must have homeomorphic neighborhoods!

As a last aside, notice we had to squeeze in the word regular earlier. What does that mean?

Well manifolds have to be smooth everywhere, whereas varieties are allowed to have a small set of singular points. Broadly speaking, these are points where the tangent space has the wrong dimension. When a point isn’t singular, we call it regular, and the set of regular points is open and dense, so it’s most of the variety.

Since we expect the tangent space of a point to “look like” some small neighborhood of that point, it makes sense that “zooming in” too close to a singular point might make it look unlike the rest of the regular points on the variety, and indeed that’s the case.

At this point I encourage everyone to go look at example $I.5.6.3$ in Hartshorne. I could transcribe it here for convenience, but I wanted this to be a lower effort post, so… I won’t :P.

I have some higher effort posts in the pipeline, but for now, it’s time for bed.