The other day SMBC put up a lovely comic which did a great job nerdsniping me. I knew that I wanted to try to solve it as soon as I saw it, but I didn’t have the time for a little while (it’s midterm season and I had grading to do). It’s a cute problem, and I want to share my solution with all of you! First, here’s the comic that started it all: 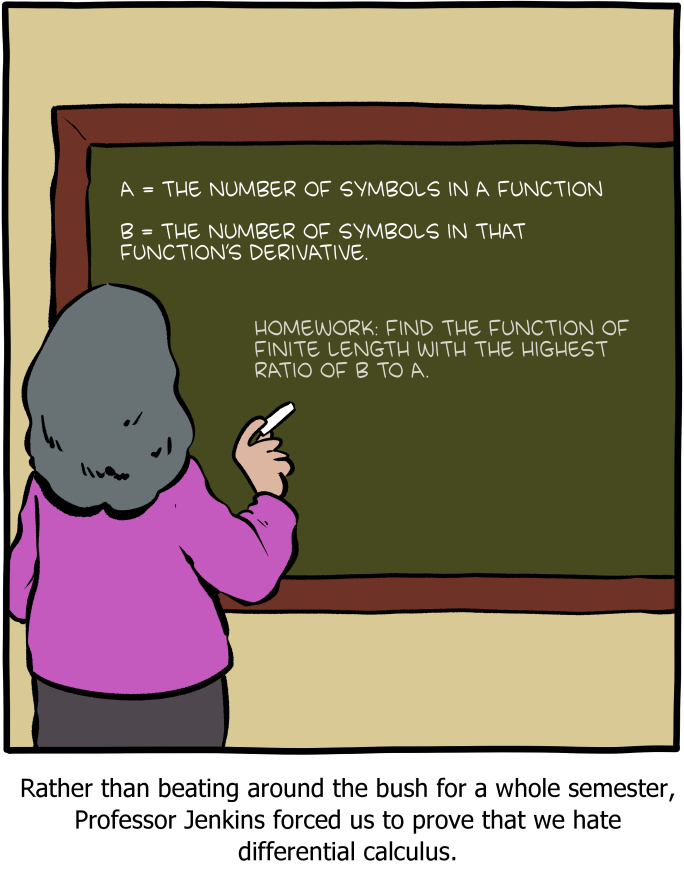 Now, my old advisor (Klaus Sutner) used to say that whenever you’re faced with a problem, you can hack or you can think, but you can’t do both. Multiple weeks ago I was in more of a hacking mood, so I wrote up some haskell code to just try all the “reasonable” functions I could think of. By this, of course, I mean the elementary functions.

There’s an obvious recursive way to build up the elementary functions (which you should think of as those functions which might show up in a calculus class):

We can formalize this with a datatype1

Obviously this list, while exhausting the elementary functions, is still somewhat arbitrary. For instance, $\sec$ is nowhere on this list, but we can build it using the functions that are on this list2. Conversely, we added a builtin function for $\tan$, even though we can express it using $\sin$ and $\cos$. The decision to add squaring and square roots as primitive, while relegating cubes and cube roots, etc. to a definition using Const and Pow was similarly arbitrary.

I went for this list basically because it’s what the wikipedia article names explicitly. Later on we’ll show that our solution doesn’t depend on the exact list chosen, so we don’t need to worry about this.

Next up, we need to tell haskell how to compute the derivative of a function. Thankfully, derivatives can be computed recursively, so this is quite easy to code up:

This isn’t perfect. For instance, it doesn’t simplify multiplication by $1$, etc. But I wanted a quick and dirty approximation, and importantly, I didn’t want to spend too long on this project3.

As a (fun?) exercise, write a prune function which makes some easy simplifications after differentiating. Does that change which functions grow the most in complexity?

Next, we need a way to figure out how many symbols are in a given expression. This is also easy to implement:

Lastly, we need a way to build up every expression with $n$ symbols. This way we can differentiate them all, and see which gives us the largest output!

Now, my laptop can fully exhaust every function with $\leq 4$ symbols, and we see that our best bets are

(note that the innermost $x$ counts as a symbol).

This is fairly good evidence that repeatedly composing $\arccos(x)$ with itself is the winner, and even though we can’t test every function with $\geq 5$ symbols, we can test a lot of them, and after letting the code run for just over $24$ hours, iterating $\arccos$ was still the winner.

So, in light of our computational evidence, we might conjecture that $\lvert f’ \rvert$ is maximized (among functions with $\lvert f \rvert = n$) for $f = \arccos(\arccos(\ldots(x)\ldots))$.

At this point, it’s time to stop hacking, and start thinking! Let’s try to prove that this is the best option. Notice we can easily compute $\lvert \arccos(\arccos(\ldots(x)\ldots))’ \rvert = \frac{n^2}{2} + \frac{13n}{2} - 6$ (either by solving some recurrence, or by checking oeis), so we should have some simple proof by induction ahead of us.

If $\lvert f \rvert \geq 3$, then we case on the outermost constructor.

If instead the outermost constructor of $f$ is binary, then we have

In each of these cases we compute $\lvert f’ \rvert$, and find

You can see by this desmos graph that this fails in general. Indeed, the earliest failure happens when $n=8$ and $k=6$. Of course, this is outside of the $n \leq 4$ range that I was able to exhaustively test, and even the $n \leq 6$ range that I had tested a lot of5.

This is a perfect example of Klaus’s “Magic Spiral”, which he shows in the first CDM lecture every year. 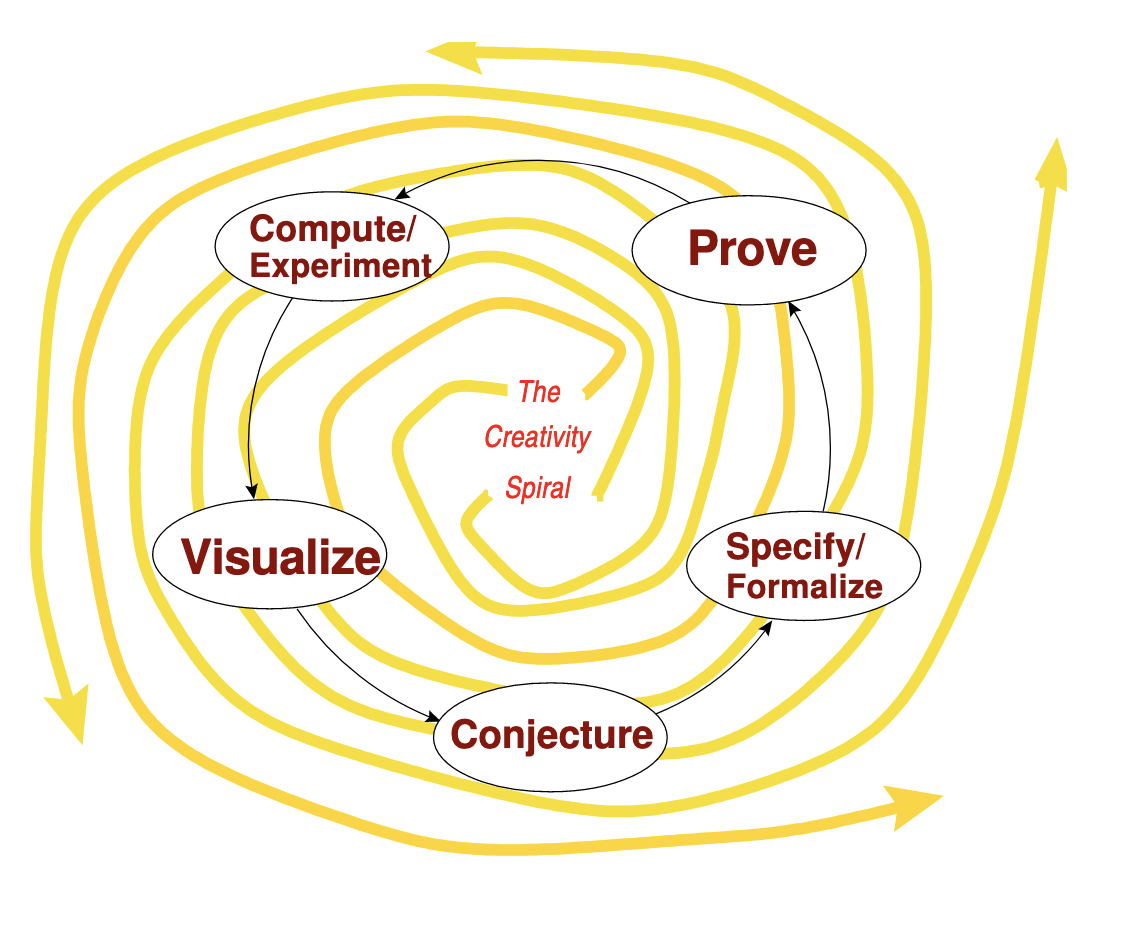 In this particular situation, there wasn’t a ton to visualize, so we jumped straight from “compute/experiment” to “conjecture”. Indeed, our computations seemed to suggest that iterating $\arccos$ was the right approach, but when we tried to prove it we failed.

This is ok, though! Good, even, because our failure is instructive! We know where our proof failed, and this tells us where we should focus our computational effort on our next trip around the spiral.

Now with Pow and ACos to worry about, it’s much less clear what the optimal function will be. After all, we’ll need to balance the two, and I don’t have the processing power to do an exhaustive search of $n=8,9,10$ (say) to try and guess at a pattern6.

Thankfully, this problem still admits an asymptotic solution, and our earlier proof attempt is easily adapted to this setting.

Now, the most important skill a mathematician should learn is how to cover their tracks7. So when presenting a result like this to journals, we should never say that we’re presenting an asymptotic solution because we didn’t have the time to get a closed form.

Instead, we should argue that the choice of constructors for the elementary functions was arbitrary, and any closed form for the maximal size of $\lvert f’ \rvert$ necessarily depends on the choice of constructors! Indeed, there are other conventions one could make, such as deciding to not count multiplication towards the symbol count, since we often denote multiplication by juxtaposition, which doesn’t require a “symbol” at all.

Moreover, our proof shows that this is independent of the choice of presentation of the elementary functions.

Since we’re only interested in asymptotics, there’s nothing interesting to prove about the base case.

For the inductive case, we case on the outermost constructor of $f$.

where the $O(1)$ term is independent of $c$ and keeps track of the symbols involved in representing the multiplication, etc. The big-ohs around $\lvert g \rvert$ and $\lvert g’ \rvert$ account for the fact that we might use each of these a constant number of times9.

and the claim follows.

As for the tightness of this bound, any presentation of the elementary functions must have at least one trig function (since we cannot build the trig functions from the others), say $\sin$. Then the $n$-fold composition $\sin(\sin(\cdots(\sin(x) \cdots)))$ is easily seen to have a derivative with quadratically many symbols.

So we see that the precise question posed in the comic has no answer! It asks for the maximal ratio of $\frac{\lvert f’ \rvert}{\lvert f \rvert}$, but we’ve just shown that this ratio is unbounded. Of course, it’s still a fun problem, and a natural variant does admit a nice solution (which we found).

Moreover, this was a good way to showcase the back and forth between computational experimentation and proof. Sometimes you get things wrong, and that’s ok! We learn, and we form new conjectures that are more likely to be correct with every trip around the spiral.

As a cute project idea, while I was writing this one of my friends (Rahul) sent me a blog post where Iago Leal de Freitas built a calculus evaluator in haskell that does simplification properly!

A better hacker than me can probably modify this code to push things a bit further (especially with some parallel computation) to try and find a family of functions $(f_n)$ attaining the maximum ratios $\frac{\lvert f_n’ \rvert}{\lvert f_n \rvert}$.

This should be a pretty approachable problem for an enthusiastic combinatorics student, and I would love to see somebody do it ^_^

This was a lot of fun! It’s been in the works for a while now (since April 28, apparently), but I really only worked on it for a few days. I’m busy working on a lot of other stuff11, and I’ll hopefully share some of it soon.

One of the biggest things I’ve been spending time on (which probably also qualifies as an announcement) has been the HoTTEST Summer 2022, where I’ll be TAing this summer. I’m already pretty active answering questions in the discord, and I’ve been brushing up on my HoTT to get ready12. I can not express how excited I am to be working on this, and if anybody wants to show up, you’re more than welcome! We’re quickly coming up on 1000 participants (of all experience levels), and it’s sure to be a great time!