This quarter I’ve been running a reading group for some undergraduates on pointless topology. I want to take some time to write down a summary of the basics of locales (which are the object of study of pointless topology), both so that my students can have a reference for what we’ve covered, and also because I think there’s still space for a really elementary presentation of some of these topics, with a focus on concrete examples.

In particular, it took me a long time to find examples of how people actually build a locale (that doesn’t obviously come from a geometric theory). Hopefully this post will help fill that gap! In the near future, I’d like to write a follow-up post about how we can build new locales from old ones too, but that’s a problem for another day.

Our first few weeks were a crash course on the kind of category theory that I usually assume my readers know already, with a focus on partial orders and lattices1. After spending time getting to adjoint functors, we defined a topological space, and then observed that the lattice of open sets has a certain algebraic structure:

We quickly abstracted this into a definition2:

Moreover, we have to explicitly require that

(since lattices are not automatically distributive).

A Homomorphism of Frames is a map $\varphi : F \to G$ which preserves finite meets and arbitrary joins3.

Now, inspired by the fact that continuous maps of topological spaces $(X,\tau) \to (Y,\sigma)$ are in bijection with frame homomorphisms from $\sigma \to \tau$, we define the category of Locales to be opposite the category of frames.

Of course, there’s no sense in having a definition without examples!

The first important class of examples are the “geometric” ones. Every topological space4 is specified in terms of either a base or a subbase, and we can imitate these constructions exactly in the world of locales.

Let’s do the real numbers to start. These have a basic open for each interval $(a,b)$. Classically we can take all such intervals, but constructively it’s more hygienic to take only the intervals with rational endpoints. Obviously these generate the same topology, so we’re not losing anything by doing this.

Now, the intervals $(a,b)$ form a meet semilattice where we define

As an easy exercise, draw a picture of two intervals $(a,b)$ and $(a’,b’)$ and convince yourself that their intersection is really given by the meet as defined above

This is telling us that our open intervals really are a basis in the strong sense that the intersection of two basic opens is basic open.

From here, we want to define a topology by declaring an open set to be an arbitrary union of the basic opens. In the locale-theoretic world, we take this meet-semilattice and (freely) close it under arbitrary joins!

To do that, we recall the adjunction

As a nice exercise, you should check that $\mathcal{D}P$ really is a frame. Moreover, that the inclusion $P \hookrightarrow \mathcal{D}P$ preserves $\land$.

Of course, there’s nothing special about $\mathbb{R}$ here!

Given any meet-semilattice of basic open sets6 $(M, \wedge)$, the downsets $\mathcal{D}M$ form a locale where every open is the union of basic opens in $m$ (here, as usual, we identify $m \in M$ with the principal downset \(\downarrow \! m \in \mathcal{D}M\)).

In the next blog post of the series, we’ll talk about product locales, and we’ll show that $\mathbb{R} \times \mathbb{R} \cong \mathbb{R}^2$.

For another example of building locales from a geometric space, let’s build $S^1$ together! We have a few options for how to do this.

In particular, the usual topology on $S^1$, viewed as a frame, gives a locale for $S^1$ with no changes necessary.

If we need to, though, we can also build $S^1$ by hand. After all, we can describe the open arcs and their intersections as basic opens, then take downsets just as we did for $\mathbb{R}$.

However, it would be nice if we could somehow define $S^1$ to be $\mathbb{R} / \mathbb{Z}$. I’ve never actually seen anybody talk about how to do this, so this blog post seems like a perfect place!

Since locales are dual to frames, a quotient locale (that is, an epimorphism) should correspond to a subframe (that is, a monomorphism), and a moment’s meditation on the quotient topology shows that we want to consider the sublocale of open sets fixed by the $\mathbb{Z}$ action. So a typical open in this sublocale looks like 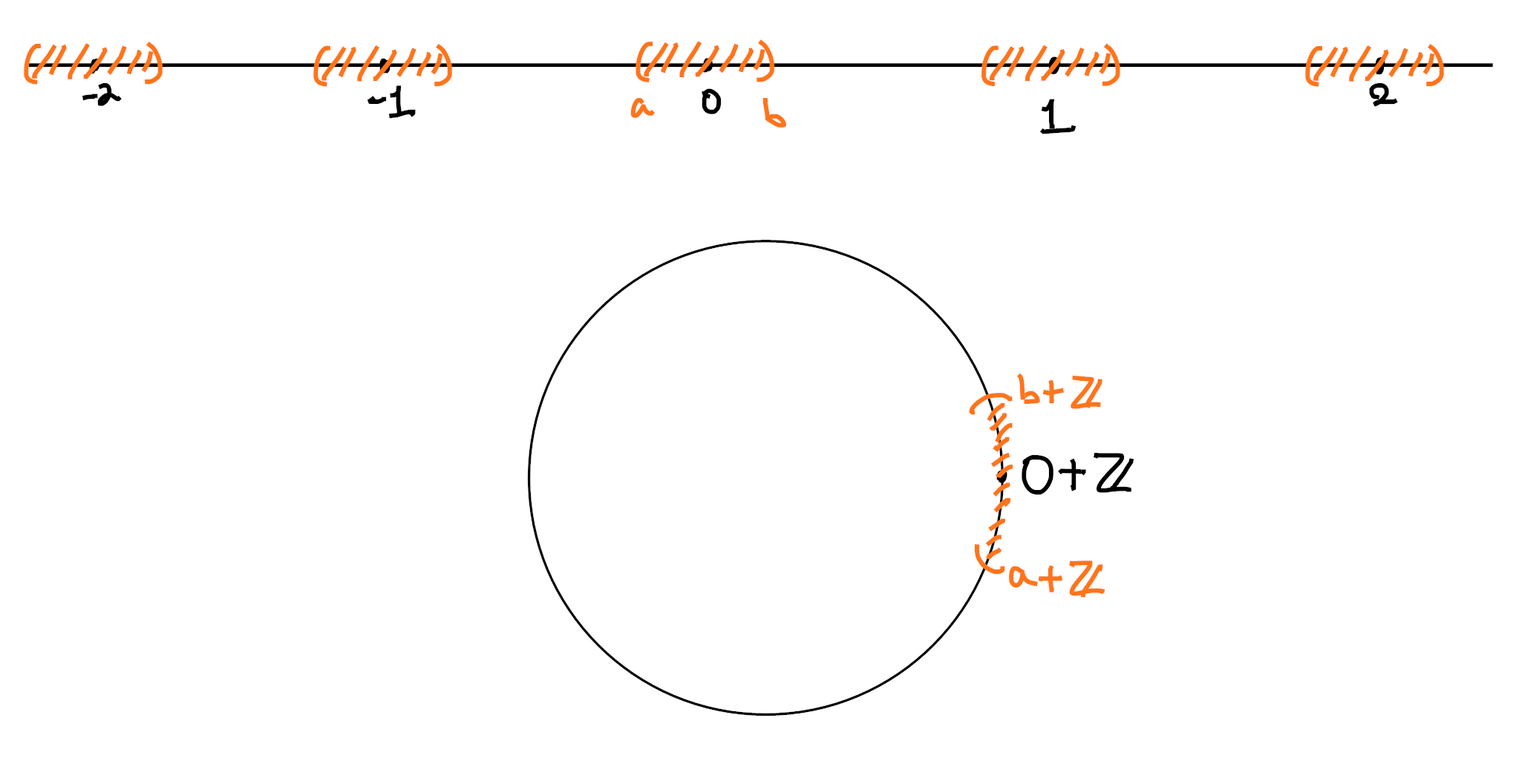 But what, I hear you asking, if our basic opens are just basic in the usual sense? For instance, how can we describe a locale associated to a general metric space?

The answer, dear reader, is Sites8.

Johnstone (in section II.2.11 of Stone Spaces) requires his sites to be meet semilattices, but this is still not as general as I would like9. After all, the open balls in a metric space are very rarely closed under intersection! It took me a surprisingly long time to find a satisfying construction, but Vickers (in Compactness in Locales and in Formal Topology) gives the following definition, which does exactly what I want:

A Flat Site is a preorder $(P, \leq)$ equipped with a coverage relation $\vartriangleleft$ between $P$ and the powerset $\mathcal{P}(P)$ which satisfies the following “flat stability” axiom:

Then the frame presented by a flat site is

That is, we we force the coverage relation $p \vartriangleleft A$ to become an actual covering in the frame10.

This might feel slightly tautologous, since metric spaces are hausdorff, thus their usual topology already gives us a frame.

Of course, locale theory (like most of my interests) has a dual nature as a geometirc subject and a logical subject. The previous section was about locales which arise from geometric objects, but what about locales arising logically?

Let’s start with the notion of a (propositional) geometric theory.

Fix a family of “primitive propositions” $P_\alpha$. Then geometric formulas are described by the following grammar:

Next, a geometric sequent is an object of the form

where $\varphi$ and $\psi$ are geometric formulas. We interpret this as expressing “whenever all of the $\varphi_k$ are true, $\psi$ is true too”.

There is a sequent calculus for geometric logic, which, for those in the know, is exactly what you expect11. All that we need to know is that it lets us derive the truth of certain sequents in a way that formally mirrors the way we prove things as mathematicians. For instance, one can derive the sequent $\varphi \land \psi \vdash \psi \land \varphi$, which tells us that $\land$ is commutative.

If we then quotient by the equivalence relation of $x \leq y \leq x$ (so we consider two provably-equivalent formulas to be “the same”) then we get a frame, where the lattice operations are given by the logical ones13! In fact, this construction gives the free frame generated by the set ${ P_\alpha }$ of primitive propositions.

Now, given a theory $\mathcal{T}$ with primitive propositions ${ P_\alpha }$, we define the Lindenbaum Algebra $\mathcal{L}[\mathbb{T}]$ to be the frame of formulas in ${ P_\alpha }$ modulo the relations

This is again a frame, which we should think of as the formulas in \(L(\{P_\alpha\})\) up to provable equivalence, where now we may use the sequents in $\mathbb{T}$ as axioms in our proofs14! In the case we view this frame as a locale, we call it the Classifying Locale of $\mathbb{T}$.

This was all very abstract, so let’s see some concrete examples:

We can push this further, though!

To get some practice interpreting geometric theories, you should try to figure out what a (classical) model of this theory looks like.

As before, the first two axioms assert that a model should define a function $f_\theta : \mathbb{N} \to \mathbb{R}$. But what does the third axiom assert?

Do you see why this is a nontrivial theory with no classical models?

The locales $\mathcal{L}[\mathbb{T}]$ are surprisingly flexible. For instance, say $B$ is a seminormed space. Then we can describe its (localic) dual space by considering a geometric theory with primitive propositions “$\varphi(a) \in (r,s)$” for each $a \in B$, $r,s \in \mathbb{Q}$. These should satisfy axioms:

Then a (classical) model of this theory is exactly the graph of a norm-decreasing linear functional on $B$! Moreover, if we use this formulation of the dual space of $B$, we can get a completely constructive proof of the Hahn-Banach theorem15!

Now, we’ve said that this is a very flexible appraoch for building locales… but just how flexible is it?

Well, it turns out that every locale arises in this way! That is, for each locale $L$, there is a geometric theory which it classifies16.

Now, tautologically, it’s clear that the lindenbaum algebra for this theory is $L$, as desired.

You’ve probably heard locale theory referred to as “pointless topology” (especially since I called it that at the start of the post!). But what does that mean?

Well, in topological spaces, we can identify points of $X$ with maps \(\{ \star \} \to X\), since these maps are completely determined by the point $f(\star) \in X$ (and conversely, every point determines a map).

Then we perform a tried and true maneuver, used by mathematicians everywhere: we take a theorem in the old setting, and turn it into a definition in our new setting! So for us, a Point of a locale $L$ is a continuous map $1 \to L$, where $1$, the terminal locale, is the one point space (that is, the locale whose frame of opens is \(\{ \bot, \top \}\))

Now we get to one of the most important punchlines in locale theory!

But turning the arrows around, we see that (classical) models of $\mathbb{T}$ are nothing but points of $\mathcal{L}[\mathbb{T}]$!

In this way, we can view $\mathcal{L}[\mathbb{T}]$ as the “space of models” of $\mathbb{T}$. Of course, some theories don’t have any classical models: for instance, the theory of surjections \(\mathbb{N} \to \mathbb{R}\) that we built earlier. In this case, our locale has no points! But nonetheless it has nontrivial topological structure.

One way to see that this nontrivial structure is interesting is by considering more general kinds of point. For instance, instead of assigning each primitive proposition the value $\bot$ or $\top$, you might assign them values in some other frame $F$. These “$F$-valued models” are interesting already, but they really shine when we see the analogue in topos theory17.

But logically, we know that we can think of these as $\mathbb{T}$ models in a world with more than two truth values. Is there some geometric interpretation of this idea?

The answer is “yes”! 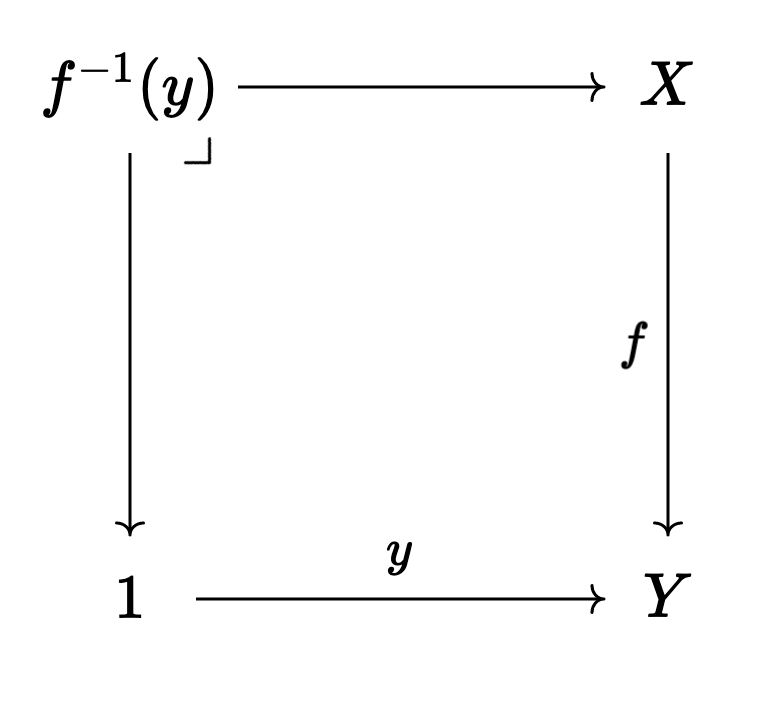 here $X_y = f^{-1}(y)$ is a locale (since the category of locales is complete), and we think of $X$ as being a family of locales $X_y$ which varies continuously in $Y$. This is another very fruitful idea which I’ll probably talk about in a future blog post18.

Ok, this was a long one, but I think there’s a lot to say about frames and locales. I’m surprised how difficult it is to find concrete examples of certain calculations on frames, and ways of building them (though maybe I’m just not sure where to look). Either way, I hope my students find this a useful (if somewhat fleshed out) review of the localic material we’ve covered so far, and I hope that future readers find this an approachable introduction to the basics of locale theory.

PS: I’ve been reading a lot of locale theory lately, particularly while looking for references that showcase either explicit constructions or interesting use cases. I usually include references either in the text or in footnotes, but I’ll actually include a short bibliography here for the papers that I found particularly insightful: