Hey all! It’s been a minute. I’ve been super busy with the UC strike and honestly I haven’t done math in any serious capacity for almost the past month. It’s been a lot of hard work trying to get fair contracts out of the UC, but I had a lot of travel plans this December to see my friends, so I’ve taken a step back from the picket line until January. Right now I’m in Chicago, so here’s an obligatory bean pic: 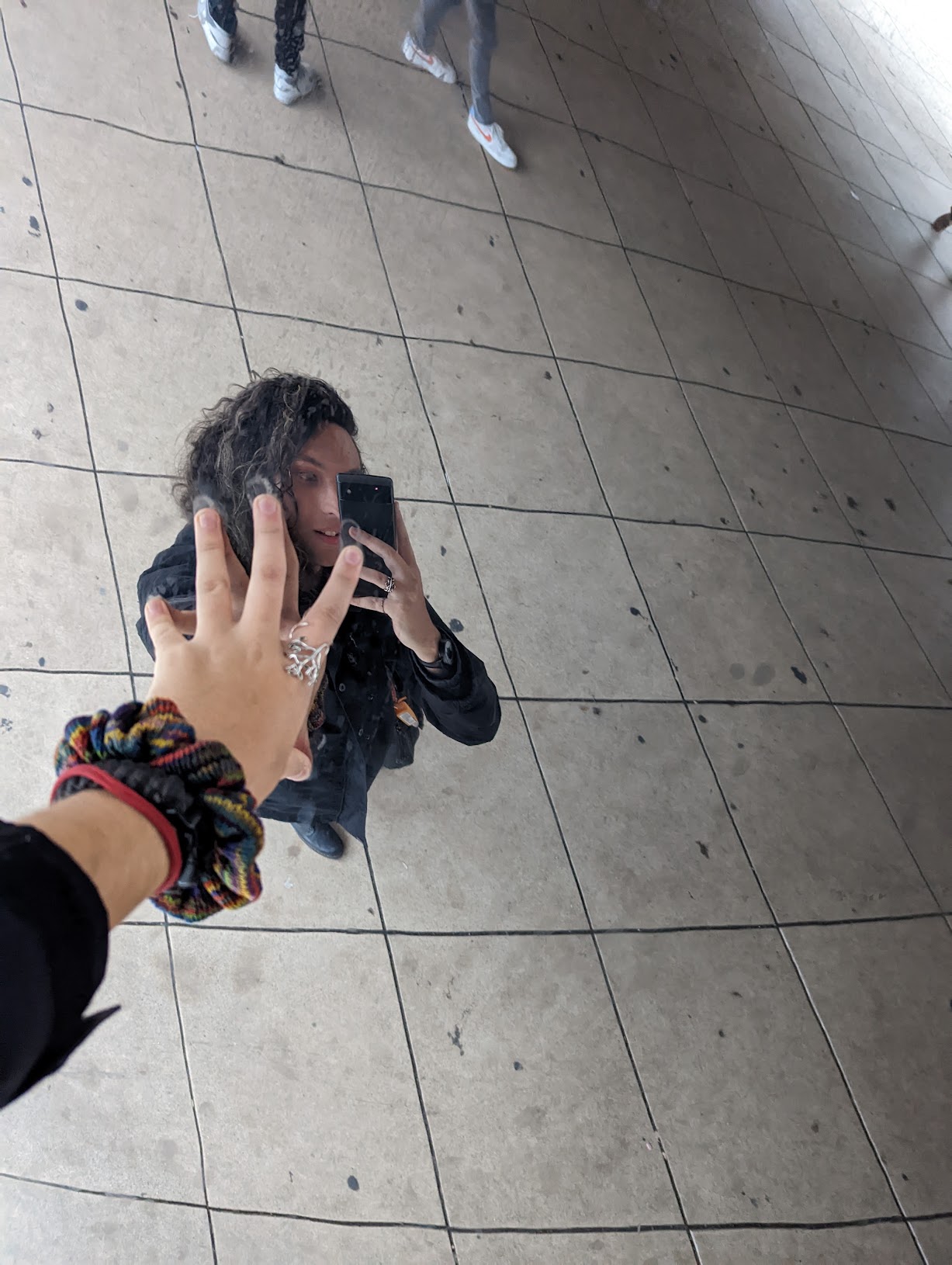 This means I have time to do math again, and it’s been really good for me to get back into it! I’ve started working with Peter Samuelson on some really cool work involving skein algebras, and I can’t wait to chat about it once I spend more time with it.

I also spent some time trying to understand manifolds in a topos of $G$-sets. I gave a (fairly informal) talk in Dave Weisbart’s seminar, where I tried to pitch him topos theory as a method of studying $G$-invariant constructions1, and I thought I remembered a result that we can get our hands on a global quotient orbifold $M // G$ by working with a manifold internal to $G$-set… I couldn’t find a reference for this, so I set about trying to prove it myself, and (to nobody’s surprise) it’s false, haha.

So my last couple weeks, when I had the energy to do math after picketing, looked eerily like Julia Robinson’s famous description of her week:

I learned a ton while doing this, though, and I wanted to share some insights with everyone. It’s really hard to find examples of people taking statements in the internal logic of a topos and externalizing them to get “classical” statements, so I had to work out a bunch of small examples myself.

Let’s go over a few together, and hopefully make things easier for the next round of topos theorists looking to do this ^_^

Let’s start small. What does it mean to say that \(\lvert X \rvert = 3\)? This is really an abbreviation saying “there’s a bijection between $X$ and $3$”, which we expand out to

Here, of course, we’re writing $A^B$ for the exponential object of the topos.

So we’re saying that \(\mathcal{E} \models \lvert X \rvert = 3\). If we switch over to the forcing language, we’re saying that \(1 \Vdash \lvert X \rvert = 3\), and from here we can follow the instructions in section VI.6 of Mac Lane and Moerdijk’s Sheaves in Geometry and Logic. In fact, since we’ll be working exclusively with grothendieck topoi in this post, we can work with the slightly simpler sheaf semantics outlined in section VI.7.

Of course, in a topos of $G$-sets, every nonempty object admits a unique epi to $1$, and every nonempty object is a disjoint union of $G$-orbits. So it’s not hard to see we can restrict attention to the connected epis (transitive $G$-sets). But we also know that truth is local. So we can pull back some transitive $G$-set along a further epimorphism to assume that our connected object is actually $G$ itself!

But what does this mean? Well, in $G$-set, the exponential $A^B$ is the set of all functions ${\varphi : B \to A}$ equipped with the conjugation action:

Notice that the global elements of $A^B$ are the maps $1 \to A^B$, which are thus the fixed points of $A^B$. But to say $\varphi = g \cdot \varphi$ for all $g$ is to say that $\varphi$ is $G$-equivariant. However generalized elements give us access to other maps. In particular:

Exercise: Show that the $G$-elements of $A^B$ (that is, the maps $G \to A^B$) are in natural bijection with ordinary functions $B \to A$ that ignore the $G$-structure entirely.

Hint: Look at what happens to the identity element of the group

So then we have two ordinary functions $\alpha : X \to 3$ and $\beta : 3 \to X$ which are mutually inverse. This means exactly that the underlying set of $X$ has $3$ elements.

This brings us to an important observation about $G$-sets:

Something is “locally” true in $G\text{-}\mathsf{Set}$ exactly when it’s true for the underlying sets. This is basically because each $G$-set $X$ is covered by $G \times X$, but this is isomorphic to $G \times UX$ where $UX$ (the underlying set of $X$) is equipped with the trivial $G$-action!

So if we want a statement in $G\text{-}\mathsf{Set}$ to externalize to something $G$-equivariant, we’ll want to avoid existential quantifiers and disjunctions (since these are only true up to a cover)2.

Well again, we see that

Notice that these local isomorphisms do not have to glue into a global isomorphism! The simplest thing to do is to give a picture. If $S = S^1$ is a circle, and $X$ is a triple cover as shown below:

then $X$ is locally isomorphic to the trivial triple cover $3$:

despite the fact that they aren’t globally isomorphic!

If you’ve never done it before, it’s worth going through this in detail!

Cover $S^1$ by open sets (so that each intersection is connected, for simplicity) and show that the two triple covers are isomorphic on each open set, but these isomorphisms aren’t compatible on intersections.

Note, as an aside, that we’ve been working with an explicit choice of finite cardinality: $\lvert X \rvert = 3$. Say instead we wanted the weaker “$\lvert X \rvert \text{ is finite}$”. There’s nothing to worry about in $G\text{-}\mathsf{Set}$ because this topos is boolean, satisfies AC, etc. However for topoi without LEM, there are multiple inequivalent notions of finiteness. See here for a discussion5.

This says that $X$ is decidable, which is language coming from a computability theoretic interpretation of our logic that I’ll save for a different post6.

which we can cash out (again, see chapter VI in Mac Lane and Moerdijk) for

Then it’s easy to see that by taking $p$ and $q$ to be the relevant inclusion maps we can satisfy our 3 conditions. Thus every $G$-set $X$ is decidable!7

The flow of the computation is hopefully becoming familiar now. For variety, since we’re working in a sheaf topos, let’s do this computation with the sheaf semantics (Maclane and Moerdijk VI.7). This lets us restrict attention to open subsets of $S$, which is sometimes useful.

Now the universal quantifiers represent true statements for any local section. That is, for each $U$ open in $S$, and for each generalized element $x,y : U \to X$ (that is, by yoneda, local sections $x,y \in X(U)$ of the sheaf $X$ over $U$)

Then since disjunctions need only be true locally, this is true exactly when we can over $U$ by opens $V_i$ so that, on each $V_i$, either

So an object $X$ in $\mathsf{Sh}(S)$ is decidable exactly when, for any connected open $U \subseteq S$, any two local sections of $X$ are either everywhere equal or nowhere equal8.

Notice the truth values are open subsets of $S$. We’re keeping track of where something is true, which is a finer (and more useful!) tool than just a simple boolean true/false.

Let’s give a bonus example as well, since this is a fairly subtle concept. 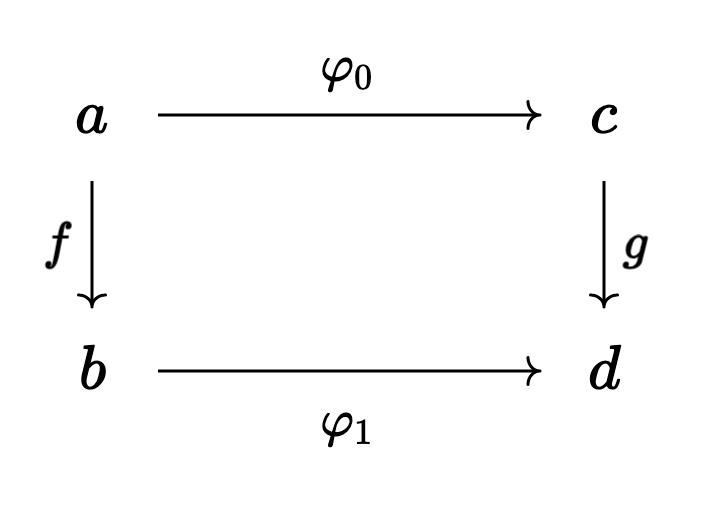 I’ll leave much of this example as a fun exercise, since it’s important to get practice working these things out for yourself! If you want to check your work, though, I’ll leave brief solutions in a fold!

First, can you compute the object of truth values $\Omega$?

Next, can you figure out what it means for an object $a \overset{f}{\to} b$ to be decidable?

This was a lot of fun, and hopefully you feel more comfortable externalizing some simple statements after reading through these. It’s all about practice practice practice, though, so I encourage everyone to come up with their own easy examples and try externalizing them! I learned a ton while writing this blog post, and that’s on top of everything I learned trying to work out what a manifold inside $G\text{-}\mathsf{Set}$ should be!

I won’t make promises, but I would love to write another post of this flavor sometime soon, where we can talk about something simple like linear algebra or basic analysis inside a topos. Of course, I have lots of ideas, and comparatively little time to write them all, so things will happen when they do ^_^.