This post has been sitting in my drafts since Feb 22, and has been mostly done for a long time. But, with my upcoming analysis qual, I’ve finally been spurred into finishing it. My plan is to put up a new blog post every day this week, each going through some aspect of the analysis that’s going to be on the qual. Selfishly, this will be great for my own preparation (I definitely learn through teaching) but hopefully this will also help future students who want to see a motivated treatment of the standard analysis curriculum.

The first half of this post is available here, as well as at the measure theory and differentiation tag. I’m also going to make a new tag for this series of analysis qual prep posts, and I’ll retroactively add part 1 to that tag.

With that out of the way, let’s get to the content!

In part 1 we talked about two ways of associating (regular, borel) measures to functions on $\mathbb{R}$:

Perhaps surprisingly, we can go the other way too!

These facts together give us a correspondence

You should think of the increasing, right-continuous functions $F$ as being antiderivatives of the positive locally $L^1$ functions $f$, and theorems like the Lebesgue Differentiation Theorem link the (measure theoretic) Radon-Nikodym Derivative of $\mu_F$ with the classical derivative of $F$.

As an exercise to recap what we did in the last post, prove that every monotone function $F : \mathbb{R} \to \mathbb{R}$ is differentiable almost everywhere1.

This result can be proven without the machinery of measure theory (see, for instance, Botsko’s An Elementary Proof of Lebesgue’s Differentiation Theorem), but the proof is much more delicate, and certainly less conceptually obvious. Also, some sort of machinery seems to be required. See here, for instance.

This should feel somewhat restrictive, though. There’s more to life than increasing, right continuous functions, and it would be a shame if all this machinery were limited to functions of such a specific form. Can we push these techniques further, and ideally get something that works for a large class of functions? Moreover, can we use these techniques to prove interesting theorems about this class of functions? Obviously I wouldn’t be writing this post if the answer were “no”, so let’s see how to proceed!

Previously we were restricting ourselves to positive locally $L^1$ functions. Since we want to meaningfully integrate our new class, it seems unwise to try and lift the $L^1$ condition. Positivity, however, seems like a natural thing to drop. Let’s be optimistic and see what happens if we work with all (complex valued) $L^1$ functions!

The correspondence says to take $f$ and send it to the measure $m_f(E) \triangleq \int_E f \ dm$. Of course, now that $f$ is complex valued, this integral might take complex values as well! To that end, let’s introduce the idea of Complex Valued Measures and see how much of measure theory we’re able to recover.

If we meditate on what properties $m_f$ will have, we land on the following definition2:

Notice $\nu E$ is never allowed to be $\infty$! This is an important difference between complex and positive measures4.

As another exercise, why does this agree with our original definition of nullsets when we restrict to positive measures?

Now, we could try to build measure theory entirely from scratch in this setting. But it seems like a waste, since we’ve already done so much measure theory already… It would be nice if there were a way to relate signed measures to ordinary (unsigned) measures and leverage our previous results!

We know that $m_{f+g} = m_f + m_g$ in the unsigned case. So in the complex case, it’s natural to try and get this linearity to go further! But we know we can write any complex function $f : X \to \mathbb{C}$ as a linear combination of $4$ positive functions, by breaking up into real and imaginary parts, then positive and negative parts:

So we should expect

and the Jordan Decomposition Theorem says5 that we can decompose every complex measure $\nu$ in exactly this way!

It can still be nice to work with an unsigned measure directly sometimes, rather than having to split our measure into $4$ parts. Thankfully we have a convenient way of doing so!

There is a positive measure $|\nu|$, called the Total Variation of $\nu$, which is defined so that

This possesses all the amenities the notation suggests, including:

In fact, the collection of complex measures on $X$ assembles into a Banach Space under the norm $\lVert \nu \rVert \triangleq \lvert \nu \rvert X$.

Ok. This has been a lot of information. How do we actually compute with a complex measure? Thankfully, the answer is easy: We use the Jordan Decomposition. We define

In particular, in order to make sense of this integral, we need to know that $f$ is in $L^1$ for each of these measures. So again, we just define

As an easy exercise, show that the dominated convergence theorem is true when we’re integrating against $\nu$!

So, as a quick example computation:

Notice, as usual, that once we’ve phrased the integral in terms of $dm$, we can simply use integration by parts, or any other tricks we know (such as asking sage) to compute the integral.

Now, that example might have felt overly simplistic. After all, it was mainly a matter of moving the $e^{ix}$ from downstairs below the $m$ to upstairs inside the integral. What if we needed to integrate against a more complicated complex measure? Thankfully, up to singular measures, every measure is of this simple form!

Remember last time, we had a structure theorem that told us every measure is of the form $m_f$, possibly plus a “singular” part $\lambda$. Moreover, the function $f$ so that $\nu = m_f + \lambda$ was the “derivative” of $\nu$, and this led us to the fruitful connection between measure theoretic and classical derivatives. Thankfully, the same theorem is still true in the complex setting!

I realized while writing this post that last time I forgot to mention an important aspect of the Radon-Nikodym derivative! It satisfies the obvious laws you would expect a “derivative” to satisfy7. For instance:

It’s worth proving each of these. The second is harder than the first, but it’s not too bad.

At last, we have a complex measure theoretic notion of “derivative”, as well as half of the correspondence we’re trying to generalize:

But which functions will generalize the increasing right continuous ones? The answer is Functions of Bounded Variation!

To see why bounded variation functions are the right things to look at, let’s remember how the correspondence went in the unsigned case: We took an unsigned measure $\mu$ and looked at (up to sign of $x$) the (increasing, right continuous) function $F_\mu(x) = \mu \left ( (0,x] \right )$.

Then if we look at the real part, we would be looking at functions $F_{\nu_R^+} - F_{\nu_R^-}$, where each $F_{\nu_R^\pm}$ is increasing and right continuous. Moreover, since complex measures are finite, we know that each of these functions is bounded as well. We could define bounded variation functions as exactly this class! That is, $f$ is bounded variation if and only if its real and imaginary parts are both a difference of bounded increasing functions!

Of course, nothing in life is so simple, and for what I assume are historical reasons, this is not the definition you’re likely to see (despite it being equivalent).

The more common definition of bounded variation is slightly technical, and is best looked up in a reference like Folland. The idea, though, is that $F$’s ability to wiggle should be bounded – whence the name8. 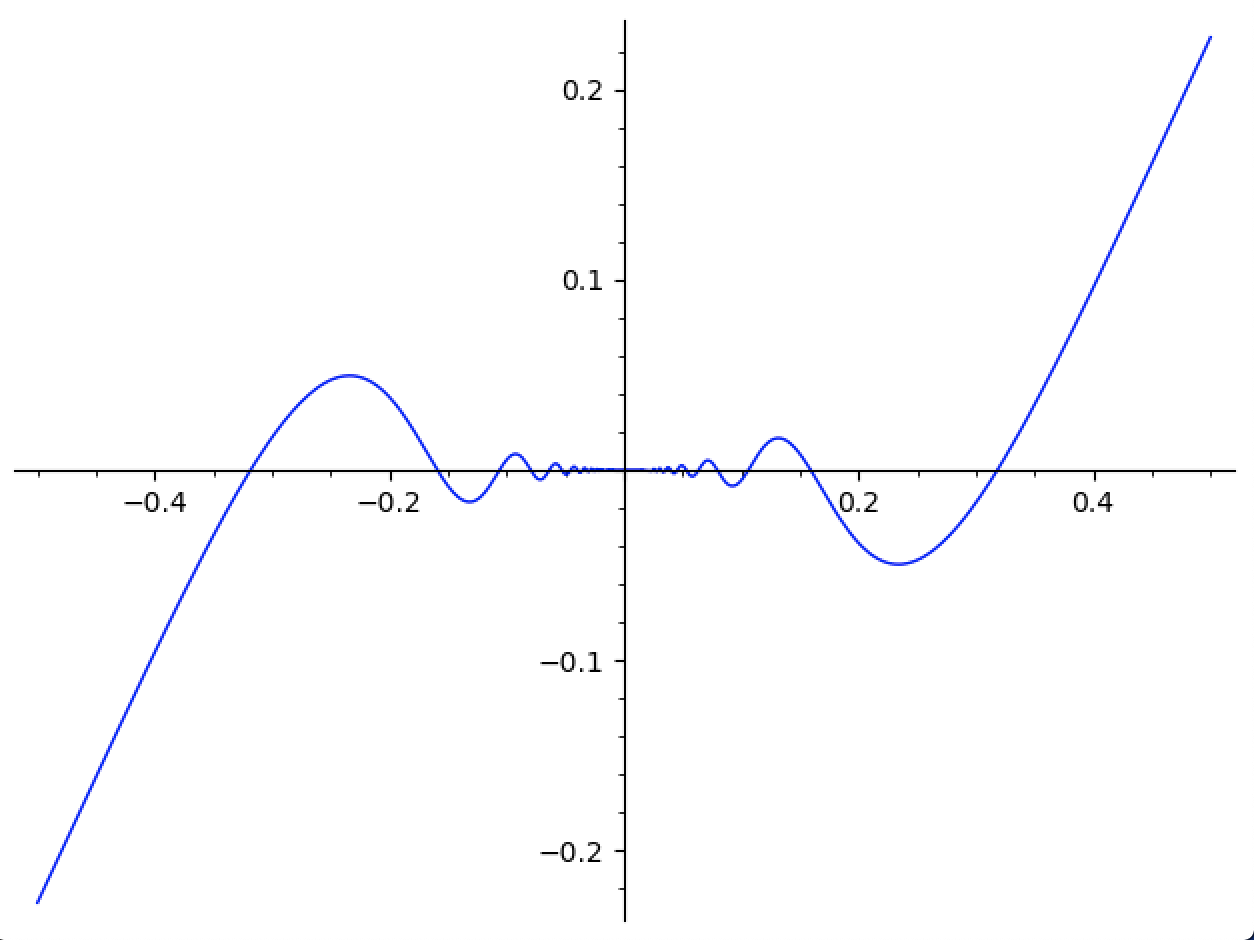 Even though $F$ wiggles faster and faster as $x \to 0$, the vertical distance it travels gets small fast enough to compensate. Contrast that with $G$: 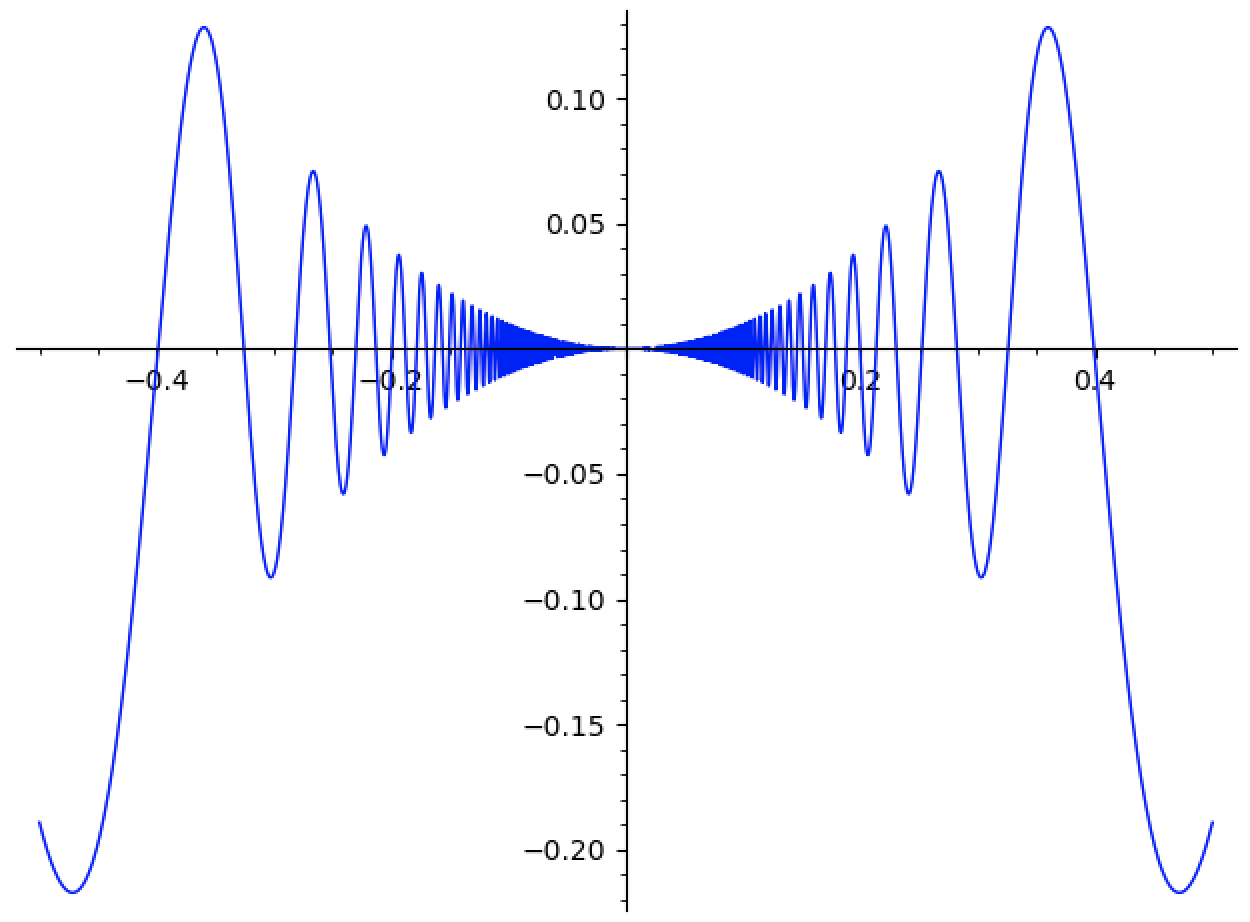 whose wiggle-density is obviously less controlled9.

We also get some results that will be familiar from the last post. These are akin to the properties of monotone functions that relate them to increasing right continuous functions, and thus measures.

This brings us to our punchline!

Conversely, if $F$ is normalized bounded variation, then there exists a unique complex borel measure $\nu_F$ so that $F = F_{\nu_F}$.

So we have correspondences:

As one last exercise for the road, you should use this machinery to prove Rademacher’s Theorem:

If $F : \mathbb{R} \to \mathbb{C}$ is locally lipschitz, then $F$ is differentiable almost everywhere11.