The definition of a Chain Homotopy has always felt a bit weird to me. Like I know that it works, but nobody made it clear to me why it worked. Well, the other night I was rereading part of Aluffi’s excellent Algebra: Chapter 0, and I found a picture that totally changed my life! In this post, we’ll talk about two ways of looking at chain homotopies that make them feel more like their topological namesake.

(As an aside, I was reading through Aluffi because I’ve been thinking a lot about derived categories lately, and I wanted to see how he motivated them in an introductory algebra book. I’ll be coming out with a blog post1, hopefully quite soon, where I talk about model categories and their close friends $\infty$-categories. It’s been easily my hardest ever post to write, but I think it’s almost ready! So get excited ^_^)

I want this to be a genuinely quick post, so I’ll be assuming some familiarity with algebraic topology, mainly homology and chain complexes. As a quick refresher, though:

A Chain Complex of abelian groups is a sequence

We’ll refer to the entire complex by $A_\bullet$, and we’ll (abusively) suppress the indices of the “boundary maps” $\partial_n$, calling them all $\partial$2.

These first arose in topology. For instance, in order to study the (singular) homology of a topological space $X$, we build a chain of abelian groups

Then the Homology Groups of $X$ are defined to be

I won’t says any more about this here, but if you’re interested you should read my old post on cohomology3. What matters is that this “boundary operator” literally comes from the boundary of a geometric object!

I also won’t try to motivate chain complexes in this post4. It turns out they’re extremely useful algebraic gadgets, and show up naturally in every branch of modern geometry, as well as in “pure” algebra such as group theory, module theory, representation theory, etc. Chain complexes are ubiquitious in math nowadays, and if you haven’t met them yet, you’ll surely meet them soon!

Next, topologically we have a notion of “homotopy”:

For geometric reasons, we expect that two homotopic maps $f$ and $g$ should induce the same map on homology5, so we would like a way of translating the homotopy $H$ into an algebraic object.

At this point I’m legally required to show the following diagram:

So this all works… but this condition has always seemed a bit odd to me. Where is this definition of chain homotopy coming from? It must be some translation from the topological notion of homotopy into the algebraic world… But how?

The first approach is the one that inspired me to write this post. You can read the original on page $611$ of Aluffi’s Algebra: Chapter 0. In case a new edition comes out, this is Section IX.4.3. 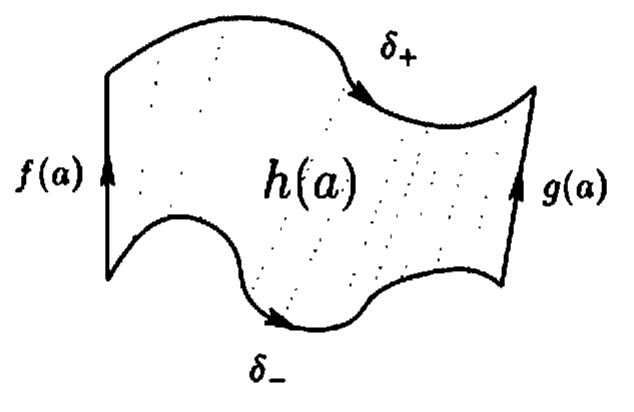 Now for the magic! Let’s look at the boundary of $h(a)$. This is given by the (oriented) sum of the four sides of our square. So if we read counterclockwise starting at the bottom right, we see

which we recognize as the definition of a chain homotopy!

There’s another, more conceptual, way to relate the notion of a chain homotopy to the classical topological notion of a homotopy. This time, we’ll go through the machinery of a model category.

Now, if I didn’t want to motivate homology in this post, I certainly don’t want to motivate model categories! Or even define them for that matter. I fully expect this material to be less approachable than what came before, but that’s not so big a deal8. To quote Eisenbud:

You should think of [this] as something to return to when more of the pieces in the vast puzzle of mathematics have fallen into place for you.

Is there a way to directly imitate this definition in the category of chain complexes? Surprisingly, the answer is yes!

What about the interval $[0,1]$ is really useful for this definition? Well, obviously it has two special points $0$ and $1$. But moreover, it’s contractible, so it’s equivalent to a point itself. This is best made precise through the language of model categories (or better, $\infty$-categories) but we can find an object in the category of chains which plays the same role!

How do we do it? Well, let’s build the (simplicial) chain complex of the interval!

So we can think of this chain complex (with $0$s going off to the left and right) as a kind of “interval object” inside the category of chains9. With that in mind, let’s call it $I_\bullet$. 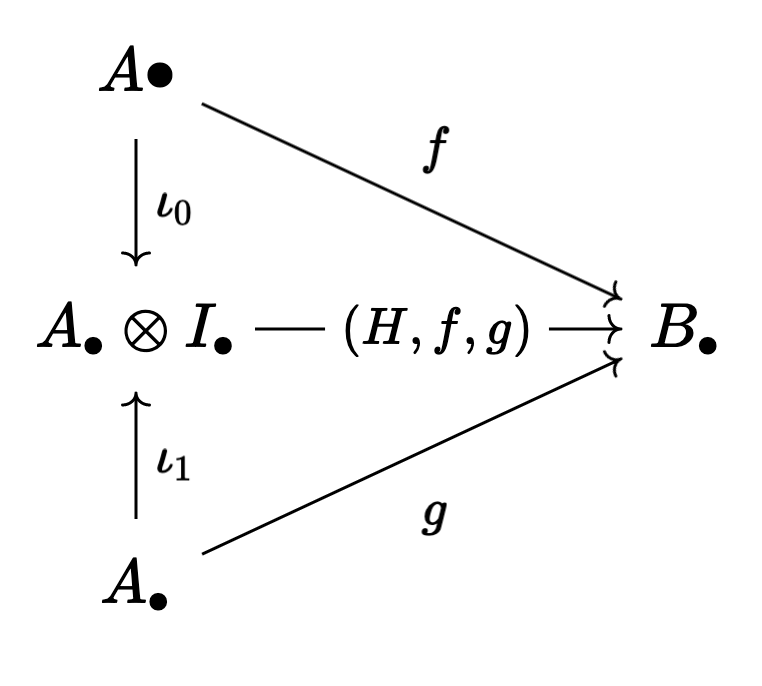 If you get stuck, you can find a proof in proposition 3.2 here

I’ve been working with chain homotopies for years now, and out of familiarity I’d stopped wondering what the definition really meant. Pragmatically this was probably good for me, but I remember in my first algebraic topology class being horribly confused by the origins of this definition, and I’m glad that I finally figured out how this definition relates to the underlying geometry! Hopefully you found this helpful too if you’re still early in your time learning about chain homotopies. To me, this makes the definition feel much more natural.