I’m a TA at the HoTTEST Summer 2022, a summer school about Homotopy Type Theory, and while I feel quite comfortable with the basics of HoTT, there’s a ton of things that I should really know better, so I’ve been doing a lot of reading to prepare. One thing that I didn’t know anything about was $\infty$-categories, and the closely related model categories. I knew they had something to do with homotopy theory, but I didn’t really know how. Well, after lots of reading, I’ve finally figured it out, and I would love to share with you ^_^.

This was originally going to be one post, but it ended up having a lot of tangentially related stuff all mashed together, and it felt very disorganized and unfocused1. So I’ve decided to split it into four posts, with each post introducing a new, more abstract option, and hopefully saying how it solves problems present in the more concrete settings.

First of all, what even is a “homotopy theory”? Let’s look at the primordial example:

Whatever a “Homotopy Theory” is, it should encompass the category $\mathsf{Top}$ of topological spaces where we identify spaces up to (weak) homotopy equivalence

But there’s another motivating example, which we also call “homotopy”:

Whatever a “Homotopy Theory” is, it should encompass the chains of modules, where we identify two chains up to quasi-isomorphism

More abstractly, what links these situations? Well, we have some objects that we want to consider “the same up to homotopy”, and we capture this (as the category inclined are liable to do) by picking out some special arrows. These are the “homotopy equivalences” – and they’re maps that we want to think of as isomorphisms… but which might not actually be.

With these examples in mind, what should a homotopy theory be?

A Relative Category is a small3 category $\mathcal{C}$ equipped with a set of arrows $\mathcal{W}$ (called the Weak Equivalences) that contains all the isomorphisms in $\mathcal{C}$4.

Following our examples, we want to think of the arrows in $\mathcal{W}$ as being morally isomorphisms, even though they might not actually be isomorphisms.

Now, a (small) category is an algebraic structure. It’s just a set with some operations defined on it, and axioms those operations satisfy. So there’s nothing stopping us from just… adding in new arrows, plus relations saying that they’re inverses for the arrows we wanted to be isomorphisms. By analogy with ring theory, we call this new category the Localization $\mathcal{C}[\mathcal{W}^{-1}]$. This is also called the Homotopy Category of $(\mathcal{C}, \mathcal{W})$.

Tentatively, then, we’ll say that a homotopy theory is a category of the form $\mathcal{C}[\mathcal{W}^{-1}]$.

Notice that the choice of $(\mathcal{C}, \mathcal{W})$ is far from unique. It’s entirely possible for two relative categories to have the same homotopy category6

This means that if we have a question about topological spaces up to homotopy, we can study simplicial sets instead, with no loss of information! This is fantastic, since simplicial sets are purely combinatorial objects, so (in addition to other benefits) it’s much easier to tell a computer how to work with them7!

This is great, but there’s one hitch…

where all the $\overset{\sim}{\leftarrow}$s are in $\mathcal{W}$. After we invert $\mathcal{W}$, these arrows all acquire right-facing inverses, which we can compose in this chain to get an honest arrow $A \to B$.

There’s a zoo of techniques for working with homotopy categories, but they all come down to trying to tame this unwieldy definition of arrow9. In this post, we’ll be focusing on a very flexible approach by endowing $(\mathcal{C}, \mathcal{W})$ with a Model Structure.

Roughly, to put a model structure on $(\mathcal{C}, \mathcal{W})$ (which we now assume to be complete and cocomplete) is to choose two new subfamilies of arrows: the fibrations and the cofibrations.

From these, we define some “nice” classes of objects:

A fibration $f$ is an arrow that’s easy to “lift” into from cofibrant objects $A$:

For instance, covering spaces and bundles are examples of fibrations in topology. If we restrict attention to the CW-complexes then every object is cofibrant, and this statement is basically the homotopy lifting property for covering spaces.

Dually, a cofibration $i$ is an arrow that’s easy to “extend” out of provided our target $Y$ is fibrant:

We should think of a cofibration as being a subspace inclusion $A \hookrightarrow X$ where $A$ “sits nicely” inside of $X$.

For instance, the inclusion arrow of a “good pair” is a cofibration. Thus inclusion maps of subcomplexes of a simplicial/CW/etc. complex are cofibrations. More generally, any subspace inclusion $A \hookrightarrow X$ where $A$ is a nieghborhood deformation retract in $X$ will be a cofibration.

Algebraically, a map $f : A_\bullet \to B_\bullet$ is a cofibration exactly when each $f_n$ is an injection whose cokernel is projective10. This is a somewhat subtle condition, which basically says that each $B_n \cong A_n \oplus P_n$ where $P_n$ is projective. It should be intuitive that given a map $A_n \to Y_n$, it’s easy to extend this to a map $B_n \to Y_n$ under these hypotheses.

This lets us unify these diagrams into a single axiom, which says that a square of the form

The model category axioms11 imply that every object is weakly equivalent to a bifibrant object. Since, after localizing, our weak equivalences become isomorphisms, this means we can restrict attention to the bifibrant objects… But why bother?

Well in any model category we have a notion of “homotopy” between maps $f,g : A \to B$ which is entirely analogous to the topological notion. Then by studying homotopy-classes of maps, we’ll be able to get a great handle on the arrows in $\mathcal{C}[\mathcal{W}^{-1}]$!

⚠ This is not in general an actual product with some element $I$. It’s purely notational. Some authors use $A \wedge I$ instead, but I don’t really like that either.

The best notation is probably $\text{Cyl}(A)$ or something similar, but in this post I want to emphasize the relationship with the classical topological case, so I’ll stick with $A \times I$. 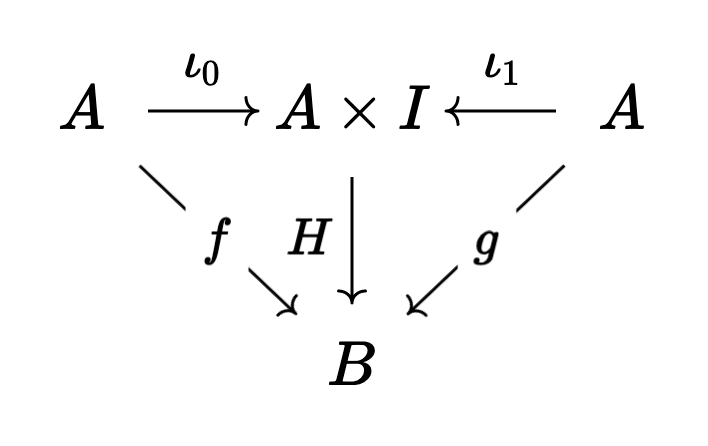 If there is a homotopy between $f$ and $g$, we say that $f$ and $g$ are homotopic or homotopy equivalent, often written $f \sim g$.

This brings us to the big punchline:

Thus, a very common way we use model structures to perform computations is by first replacing the objects we want to compute with by weakly equivalent bifibrant ones. For instance, we might replace a module by a projective resolution13. Then maps in the homotopy category $\mathcal{C}[\mathcal{W}^{-1}]$ are just maps in $\mathcal{C}$ up to homotopy14!

Notice this, off the bat, solves one of the problems with homotopy categories. Maybe $\mathcal{C}[\mathcal{W}^{-1}]$ isn’t locally small, but it’s equivalent to something locally small.

Moreover again, even if $\mathcal{C}[\mathcal{W}^{-1}]$ doesn’t have (co)limits, we can always construct homotopy (co)limits, which we can compute using the same cylinder objects from before. For instance, the homotopy pushout of

will be the colimit of the related diagram: 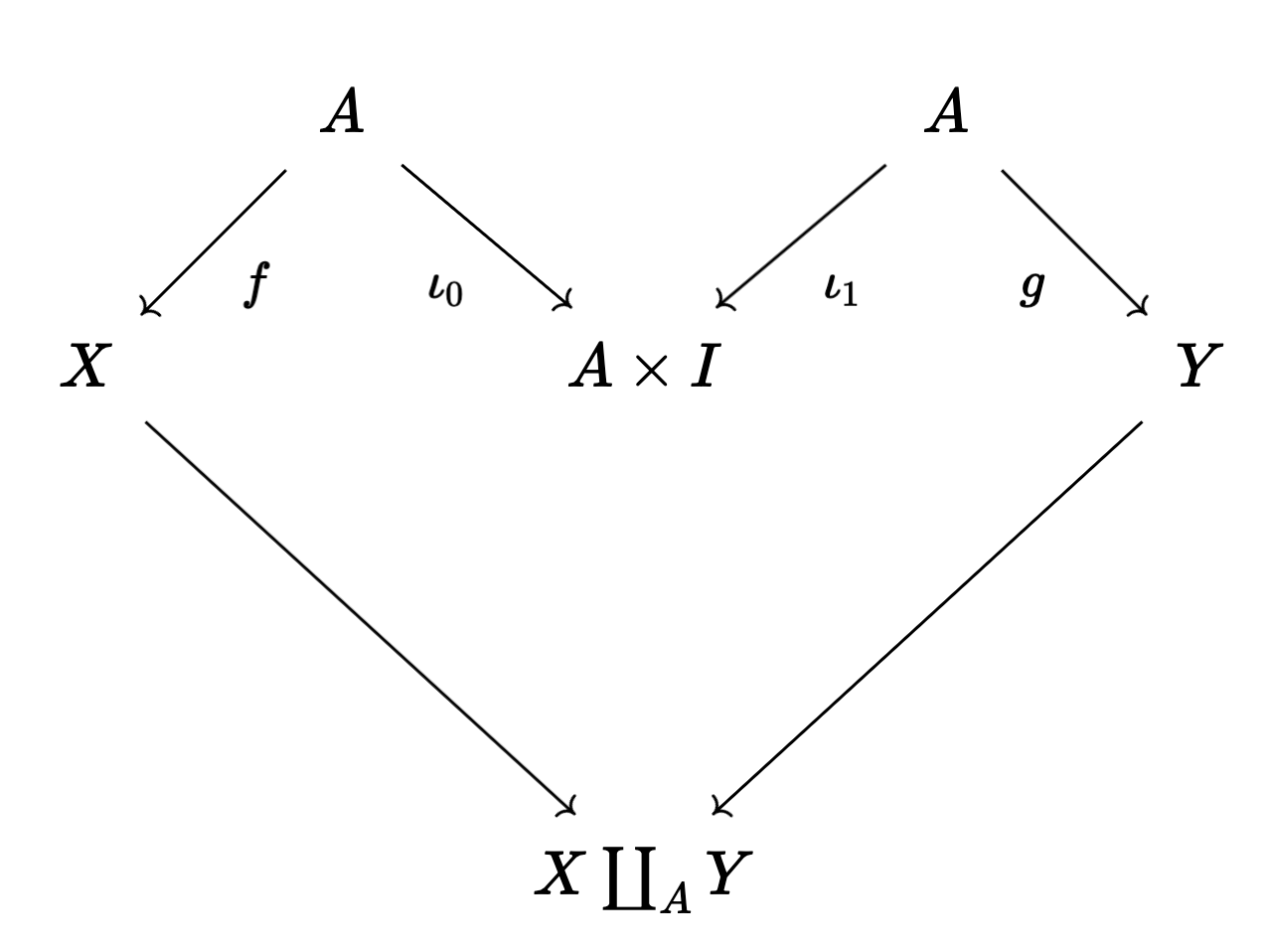 Something like this will always work, but knowing how to modify our diagram (and why) can be quite involved16. Thus we’ve succeeded in computationally solving the (co)limit issue, but it would be nice to have a more conceptual framework, in which it’s obvious why this is the “right thing to do”…

We’ve seen that a model structure on a relative category helps to make computations in the localized category $\mathcal{C}[\mathcal{W}^{-1}]$ effective (or even possible). But model categories have a fair number of problems themselves.

With this in mind, we would like to have a version of the theory of model categories which has better “formal properties”. While working with a single model category is often quite easy to do, as soon as one looks for relationships between model categories, we’re frequently out of luck. In fact, since (co)limits come from functors, as soon as we’re interested in (co)limits we already run into this problem! This is one philosophical reason for the complexity of homotopy (co)limits.

How exactly does this work? You’ll have to read more in part 2!