It’s time for the last post of the series! Ironically, this is the post that I meant to write from the start. But as I realized how much background knowledge I needed to provide (and also internalize myself), various sections got long enough to warrant their own posts. Well, three posts and around $8000$ words later, it’s finally time! The point of this post will be to explain what people mean when they talk about the “homotopy theory of homotopy theories”, as well as to explain why we might care about such an object. After all – it seems incredibly abstract!

Let’s take a second to recap what we’ve been talking about over the course of these posts.

We started with relative categories. These are categories $\mathcal{C}$ equipped with a set of arrows $\mathcal{W}$ (called weak equivalences) which we think of as morally being isomorphisms, even if they aren’t actually isos in $\mathcal{C}$. The classical examples are topological spaces up to homotopy equivalence, and chains of $R$-modules up to quasiisomorphism.

Unfortunately, homotopy categories (to use a technical term) suck. So we introduce model structures on $(\mathcal{C}, \mathcal{W})$, which let us do computations in $\mathcal{C}[\mathcal{W}^{-1}]$ using the data in $\mathcal{C}$. Model structures also give us a notion of quillen equivalence, which allow us to quickly guarantee that two relative categories present the same homotopy theory (that is, they have equivalent localizations)1.

Unfortunately again, model categories have problems of their own. While they’re great tools for computation, they don’t have the kinds of nice “formal properties” that we would like. Most disturbingly, there’s no good notion of a functor between two model categories.

Also, in the previous post we gave a second definition of $\infty$-category, based on quasicategories! These have some pros and some cons compared to the simplicial category approach, but we now have three different definitions for “homotopy theory” floating around. Is there any way to get our way out of this situation?

To start, recall that we might want to consider two relative categories “the same” if they present the same homotopy theory. With our new, more subtle tool, that’s asking if

Are you thinking what I’m thinking!?

We can do the same thing with simplicial categories (resp. quasicategories) to get a relative category of $\infty$-categories. In fact, all three of these categories admit model structures, and are quillen equivalent!

This makes precise the idea that relative categories and $\infty$-categories are really carrying the same information2!

If you remember earlier, we only gave a tentative definition of a homotopy theory. Well now we’re in a place to give a proper definition!

A Homotopy Theory (equivalently, an $\infty$-category) is an object in any (thus every) of the localizations of the categories we’ve just discussed.

But why care about all this?

It tells us that (in the abstract) we can make computations with either simplicial categories or quasicategories – whichever is more convenient for the task at hand. But are there any more concrete reasons to care?

Remember all those words ago in the first post of this series, I mentioned that hammock localization works, but feels somewhat unmotivated. Foreshadowing with about as much grace as a young fanfiction author, I asked if there were some more conceptual way to understand the hammock construction, which shows us “what’s really going on”.

Well what’s the simplest example of a localization? Think of the category $\Delta^1$ with two objects and one arrow:

Inverting this arrow gives us a category with two objects and an isomorphism between them, but of course this is equivalent to the terminal category $\Delta^0$ (which has one object and only the identity arrow).

So then how should we invert all of the arrows in $\mathcal{W}$? It’s not hard to see that this pushout, intuitively, does the job: 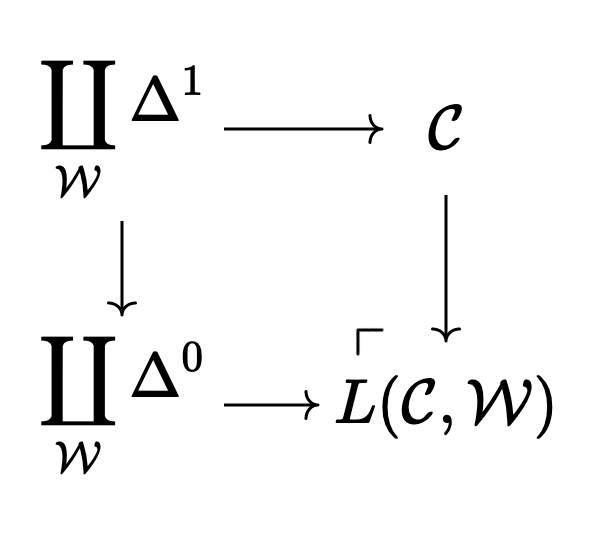 For more about this, I really can’t recommend the youtube series Higher Algebra by Homotopy Theory Münster highly enough. Their goal is to give the viewer an idea of how we compute with $\infty$-categories, and what problems they solve, without getting bogged down in the foundational details justifying exactly why these computational tools work.

Personally, that’s exactly what I’m looking for when I’m first learning a topic, and I really appreciated their clarity and insight!

With that last example, we’re finally done! This is easily the most involved (series of) posts I’ve ever written, so thanks for sticking through it!

I learned a ton about model categories and $\infty$-categories while researching for this post, and I’m glad to finally have a decent idea of what’s going on. Hopefully this will be helpful for other people too ^_^.

Stay safe, all, and I’ll see you soon!