With the intro out of the way, let’s have a quick recap.

The setting we’re interested in is a category $\mathcal{C}$ equipped with some arrows $\mathcal{W}$ that morally should be isomorphisms, but which aren’t (these are called weak equivalences, and a pair $(\mathcal{C}, \mathcal{W})$ is called a relative category). The quintessential examples are the (weak) homotopy equivalences in $\mathsf{Top}$, and the quasi-isomorphisms of chain complexes.

A model structure on a pair $(\mathcal{C}, \mathcal{W})$ is a choice of two new families of arrows, called fibrations and cofibrations, plus axioms saying how they relate to each other and to the weak equivalences $\mathcal{W}$.

A model structure on $(\mathcal{C}, \mathcal{W})$ solves many of the computational problems with $\mathcal{C}[\mathcal{W}^{-1}]$. For instance, now the homotopy category is guaranteed to be locally small, and we have effective techniques for computing homotopy (co)limits, derived functors, and guaranteeing that two relative categories have equivalent localizations. All of these techniques go through bifibrant replacement, which is a generalization of the familiar projective and injective resolutions from homological algebra.

What, then, are we to do? The answer is to fully accept homotopy theory as part of our life, and to move to a notion of “category” which is better equipped to handle the geometry which is implicit in the machinery of model categories.

To start, we need a model of “spaces” that’s more convenient to work with than topological spaces.

Here $\Delta$ (the simplex category) is the category whose objects are the nonemtpy finite totally ordered sets, with order preserving maps.

We should think of $\Delta^n$ as representing the $n$-simplex, where we’ve chosen a total order the $n+1$ vertices. This allows us to orient all the edges in a consistent way2.

Now, to every topological space $X$ we can associate a simplicial set $\text{Sing}_X$, where $\text{Sing}_X(\Delta^n)$ is the set of continuous from the (topological) $n$-simplex into $X$. This construction is familiar from, for instance, singular homology.

But there’s a natural follow up question: Can we recognize when a simplicial set is \(\text{Sing}_X\) for some space $X$? The answer, of course, is yes, but we’re not going to talk about that here. This topic deserves its own post, which is part 3.

For now we’ll content ourselves with the knowledge that simplicial sets, up to homotopy equivalence, represent spaces in a convenient way. For those following along, this is the Quillen equivalence between $s\mathsf{Set}$ and $\mathsf{Top}$ that we mentioned in the previous post!

We’ll write $\mathcal{S}$ for the homotopy category of $s\mathsf{Set}$ (equivalently of $\mathsf{Top}$), and we’ll call the objects of this category spaces.

A Simplicial Category is a category enriched in $\mathcal{S}$.

Given an $\infty$-category $\mathcal{C}$, there’s a natural way to get an ordinary category back from it. We keep the same objects, but replace the space of arrows $\text{Map}(A,B)$ by its set of connected components. We call this the Homotopy Category of $\mathcal{C}$. 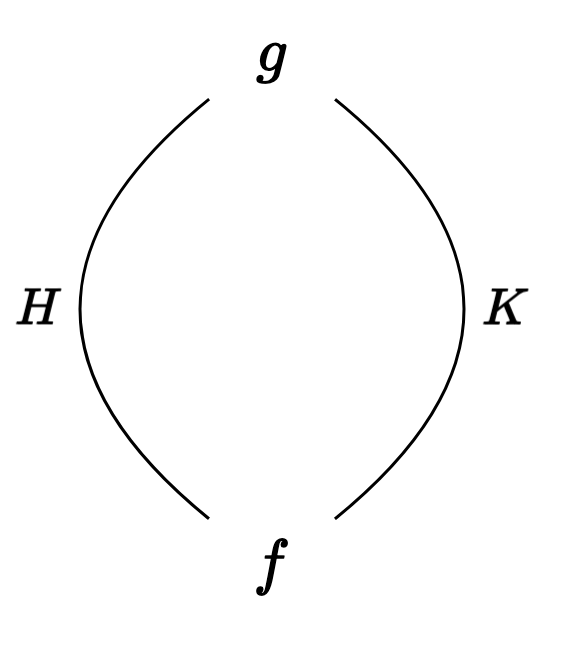 When we take connected components, these two maps $f$ and $g$ are identified, so we only see one arrow in the homotopy category.

We’ll see another, more realistic example, once we know how to build an $\infty$-category from a relative category $(\mathcal{C}, \mathcal{W})$.

So how do we build an $\infty$-category from a relative category? This is called the Hammock Construction3, and while we won’t spend too much time on this, it’s worth at least a few words!

The $0$-cells will be zigzags of the form: 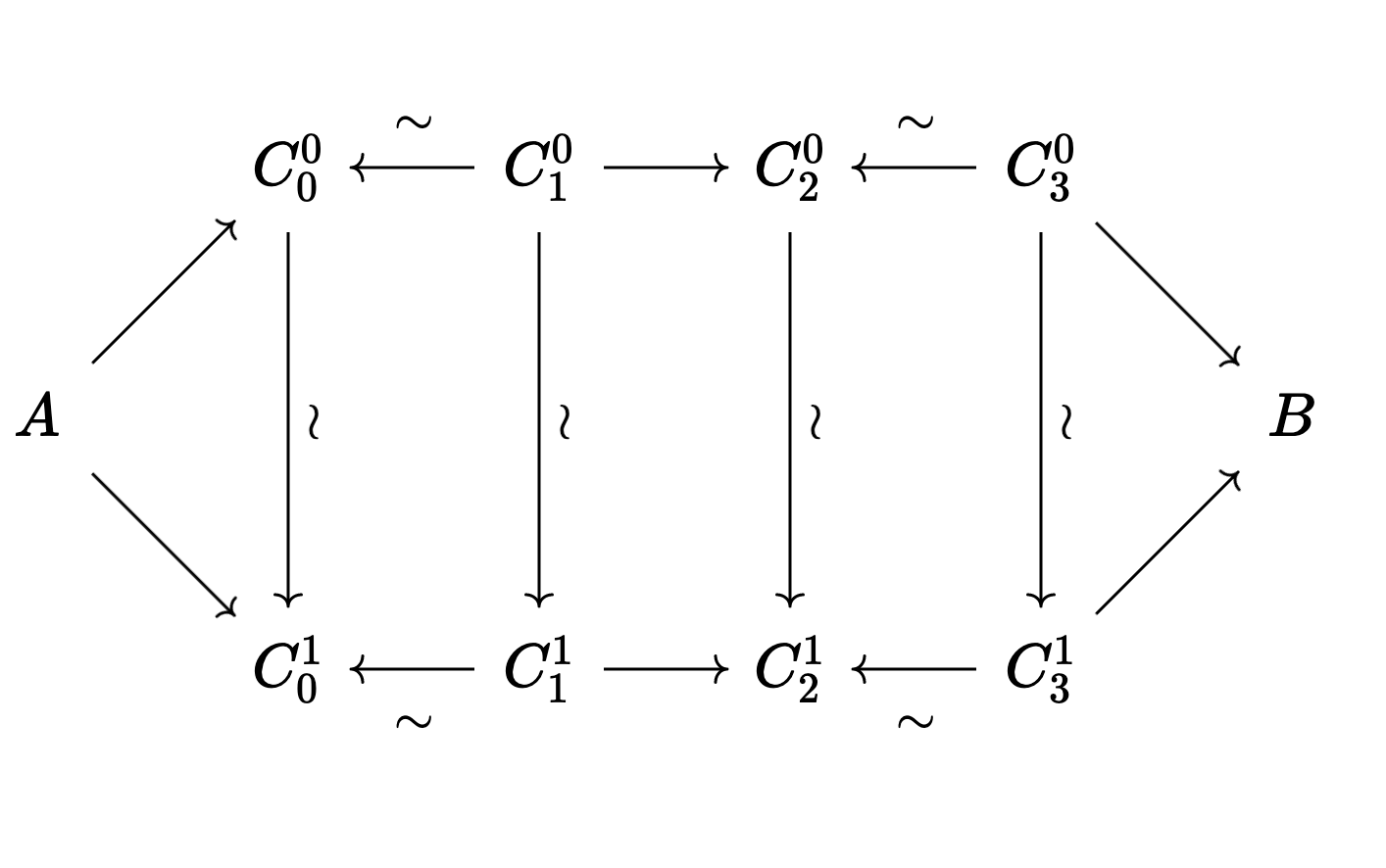 Similarly, a $k$-cell will be a hammock that is $k$ strands “wide”. Here’s the picture from the original paper: 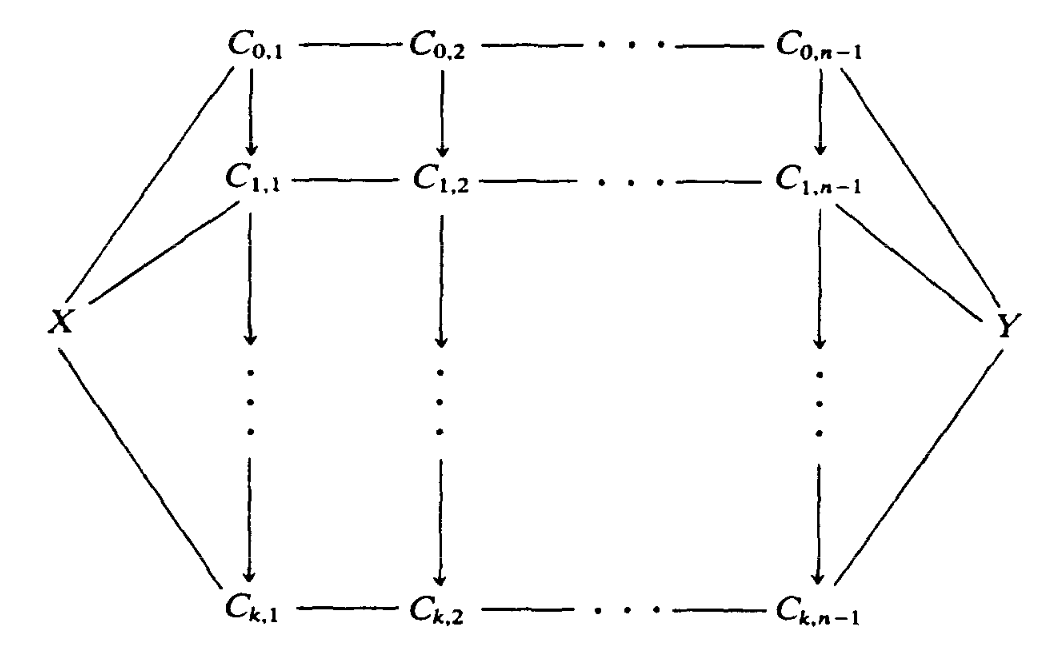 As before, the vertical arrows should all be weak equivalences, as should all the backwards facing arrows in the zigzags.

Of course, we need the face maps between simplicies. We get the $i$th face map by just omitting row $i$ from the hammock. We get the $i$th degeneracy map by repeating the $i$th row, using the identity map in each column as the weak equivalence.

Notice that the homotopy category of $L^H(\mathcal{C}, \mathcal{W})$ is equivalent to the category $\mathcal{C}[\mathcal{W}^{-1}]$, so we can recover the “classical” localization from the hammock localization whenever we want. 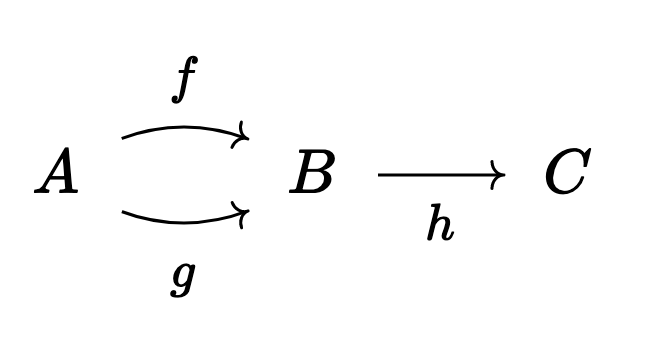 Say we want to invert $h$. After doing this we see that $f = g$, since we must have $f = h^{-1} k = g$. Thus we have lost information in the homotopy category that we didn’t necessarily plan on losing when we inverted $h$. Does the hammock localization solve this problem? 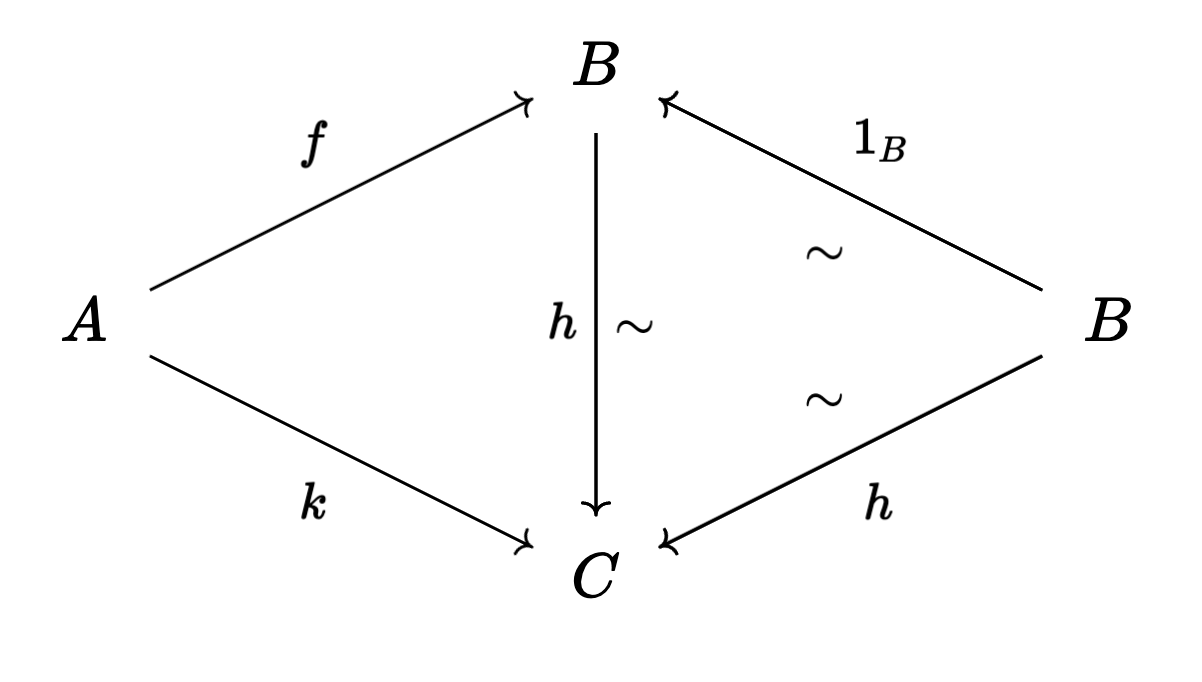 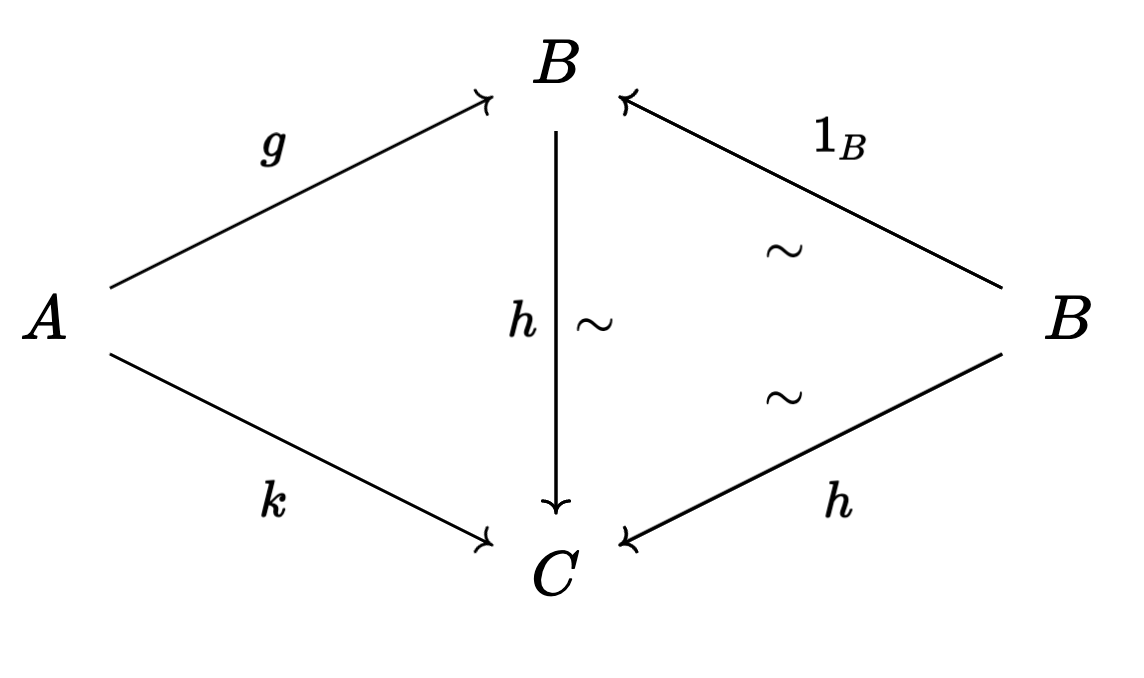 which is, of course, contractible. Crucially, though, this space is capable of remembering more information about how the maps $A \to B$ in $\mathcal{C}[\mathcal{W}^{-1}]$ were built from maps in $\mathcal{C}$, and how these relate to each other.

Consider instead the category 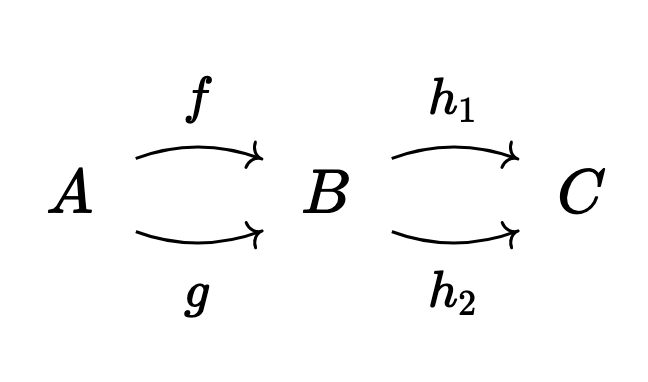 This is great, but it’s far from clear how we would do this for more complicated categories! This is ok, though. Remember that $\infty$-categories are conceptually nice but if you have a specific category in mind, model categories are where we actually want to do our computations.

It begs the question, though: just how nice are $\infty$-categories? After all, this abstraction needs to justify itself somehow.

Next, not only do we have a notion of functor, but we have a notion of functor which acts the way we expect it to. For instance between any $\infty$-categories $\mathcal{I}$ and $\mathcal{C}$, the collection of $\infty$-functors between them assembles into an $\infty$-category $\text{Fun}(\mathcal{I}, \mathcal{C})$ with a simplicial analogue of natural transformations as the arrows6.

From here, developing (co)limits is easy!

We say that a cone on $c$ is a Limit Cone if for every object $x \in \mathcal{C}$, the natural map

is an equivalence of simplicial sets7.

If this looks like an adjunction between a “limit” functor and the “const” functor, then you’d be right! We can actually develop adjunctions in this theory as well, and indeed basically any construction or theorem you would want to use from classical $1$-category theory exists in some form in $\infty$-category theory!

What’s even more remarkable is that this notion of a (co)limit computes homotopy (co)limits as a special case!

In the next post about quasicategories, we introduce the nerve construction, which lets us build an $\infty$-category from a $1$-category. Well if $\mathcal{C}$ is a model category, then a homotopy (co)limit of some functor $F : \mathcal{I} \to \mathcal{C}$ is the same thing as the $\infty$-category theoretic colimit of the induced ($\infty$-)functor $\tilde{F}$ from the nerve of $\mathcal{I}$ to $L^H(\mathcal{C}, \mathcal{W})$.

Lastly, let’s note that this is all good for something. Functors on $\infty$-categories can be “truncated” in a way that induces functors on the homotopy categories (see here, for instance). This means that, at least in the abstract, we can prove theorems using the language of $\infty$-categories, and at the end of the day we can take homotopy categories. After doing this any categories or functors we’ve built will descend nicely. In particular, since the homotopy category of $L^H(\mathcal{C}, \mathcal{W})$ is $\mathcal{C}[\mathcal{W}^{-1}]$ this gives us a very powerful mode of argument for dealing with localizations!

For answers to both of these questions, I’ll see you in the last post of this … tetralogy?

Maybe it’s best to call it a trilogy with a long quasi-categorical ~bonus post~.